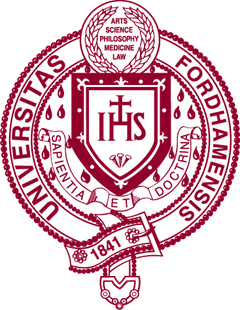 The Great Seal of Fordham University proclaims that Fordham has been a Jesuit university since its founder, Archbishop John Hughes, entrusted it to the care of the Society of Jesus in 1846.

Hence, the coat of arms of the Society of Jesus stands at its center. The coat of arms bears the Greek letters for the name Jesus—IHS—with the cross resting in the horizontal line of the letter H, and the three nails beneath, all in gold in a field framed in maroon, the color of the University, with silver fleurs-de-lis on the frame’s edge. Around the Society’s coat of arms, a scroll with the University’s motto, Sapientia et Doctrina (Wisdom and Learning), is etched, surrounded by tongues of fire that recall the outpouring of the gifts of the Holy Spirit of Wisdom (sapientia) that mark the first Pentecost.

A laurel wreath surrounding the names of the disciplines that are or have been taught at the University rests at the top of the seal. (The University had a medical school from 1905 to 1921 and a College of Pharmacy from 1912 to 1971.) These central heraldic devices are enclosed within a circular field fashioned as a belt and edged with beads. The field bears the University’s name (rendered in Latin) and the date of its foundation. Fordham University is one of only two institutions in the world whose seals are enclosed with a belt surround. Oxford University, the mother of the universities in the English-speaking world, is the other.

Fordham College at Lincoln Center is represented by the central portion of the seal of the City of New York—a windmill, symbolizing New Amsterdam, the original Dutch colonial name for the city. In turn, it frames beavers, symbolic of trade, and casks, the symbols for the commerce pursued by New York City’s founders.

Fordham College at Rose Hill is represented by the triumphant or risen lamb of God, the Tudor Rose—representing Rose Hill Manor, the property from which Fordham University grew—and the scallop shell representing Saint John the Baptist, the patron saint of the University.

The Gabelli School of Business is represented by the globe, scroll, and book, showing business education, an education that embraces a global perspective and an international marketplace.

Graduate School of Arts And Sciences

Fordham’s Graduate School of Arts and Sciences is represented by the owl of Pallas Athene, the goddess of wisdom and rational inquiry. The ancient classical traditions and the modern humanities and sciences join together in the curricular offerings of the arts and sciences. Pallas Athene’s name is spelled out in Greek letters.

Fordham’s Graduate School of Education is represented by the torch of knowledge and the book of learning, as well as the laurel wreath, representing poetics. These symbols are also found on the seals of many schools, colleges, and universities.

Fordham’s Graduate School of Religion and Religious Education is represented by an open book displaying Alpha and Omega, the Greek letters symbolizing Jesus as the beginning and the end of all things. Arising from behind the volume is a cross and its radii of light.

Fordham’s Graduate School of Social Service is represented by the symbols for the virtues of faith, hope, and charity. The cross represents Christian faith; the anchor represents hope—last to leave Pandora’s box when all other blessings within had disappeared; the heart represents charity.

The School of Law is symbolized by the scales of justice, a heraldic device that bears witness to the central work of the School: scholarly study and professional practice of jurisprudence and legal affairs.

School of Professional And Continuing Studies

Fordham School of Professional and Continuing Studies is represented by the cauldron and wolves from the central portion of the family shield of St. Ignatius Loyola, founder of the Jesuit order, who—like the students of this School—was an adult learner. Saint Ignatius’ ancient and distinguished family name “Loyola” is a contraction of the Spanish words Lobos y Olla: wolves and pot.