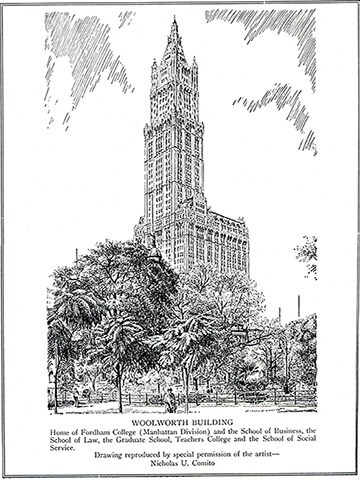 During 2016 Fordham University is proud to celebrate the Centennial Anniversary of the Graduate School of Arts and Sciences.

Established in 1916, Fordham graduate programs were initially housed on the 18th floor of Manhattan’s famous Woolworth Building—at the time a popular hub of graduate study in New York. Even in these early days, GSAS looked to the future of postgraduate study and, in 1921, Fordham awarded two of its earliest Ph.D.s—one in philosophy and another in English—to women.

Traditionally a center for elite graduate study in the humanities and biological sciences—areas in which GSAS continues to today—Fordham began to capitalize on the unique resources of its New York City location in the 1930s, expanding its graduate offerings into the social sciences and beyond. Newly reorganized under a dean of graduate studies, GSAS established a graduate department of psychology in 1933, which was joined soon thereafter by programs in sociology and anthropology. Following a period of rapid growth, in 1937 the university’s graduate programs in arts and sciences relocated to the Rose Hill campus and the newly dedicated Keating Hall, taking advantage of new research and laboratory resources that continued to establish Fordham as one of New York’s premier graduate institutions.

With the start of US involvement in World War II, Fordham responded to the nation’s pressing public policy and social infrastructure needs by reorganizing certain aspects of wartime graduate study around the demands of the conflict. Following the war’s end, GSAS programs flourished, resulting in a sizeable number of new master’s and doctoral candidates, many of whom went on to become prominent university professors, deans, elected officials, and civil servants.

Throughout the 1960s and 1970s—an era of academic expansion for Fordham—the university established new degree programs in increasingly diverse areas. Two areas inaugurated at that time, Medieval Studies and International Political Economy and Development, are today among GSAS’s best known and most selective interdisciplinary programs.

Currently, the Graduate School of Arts and Sciences continues to advance its mission through the pursuit of ambitious new initiatives that reflect our and the University’s ethos of cura personalis (care of the whole person) and “men and women for others.” In recent years GSAS students and faculty have been awarded millions of dollars in prestigious grants and fellowships, engaged in groundbreaking research, reached distinguished professional heights, and spearheaded exciting new avenues of interdisciplinary inquiry.

GSAS is proud to celebrate the successes of all of its students and alumni, inside and outside the classroom, in this Centennial Anniversary year.