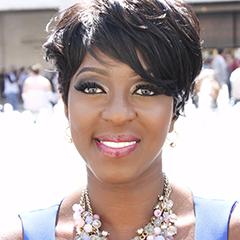 Cheryl Wills is the great-great- great granddaughter of a Tennessee slave turned Civil War soldier named Sandy Wills. In this unique production that features students, the veteran journalist brings Sandy Wills' Civil War era journey to life through pictures, song and drama. Using actual Civil War military records as a backdrop, Cheryl animates how her ancestors transitioned from a suffocating slave plantation to the freedom of a Union Army camp. She reveals documents that are rarely, if ever, discussed in textbooks or popular culture and audience members are sure to learn about a lost chapter in American History which can empower students of all backgrounds.

Cheryl Wills is an anchor and senior reporter for Time Warner Cable’s Flagship national news network New York One News. She joined the cable news network during its launch in 1992.

Cheryl is the author of Die Free: A Heroic Family Tale. The acclaimed biography is about her great-great-great grandfather Sandy Wills’ extraordinary transformation from a Tennessee slave into a courageous Civil War Soldier – who honorably served with the United States Colored Troops from 1863-1865. Her second book is an illustrated children’s version of her biography called The Emancipation of Grandpa Sandy Wills.

Cheryl has received awards from The Associated Press, New York Press Club, Newswomen’s Club of NY Front Page Award as well as a medal of excellence from the prestigious United Nations Correspondents Association. In recognition of her career, the veteran journalist received an Honorary Doctorate from New York College of Health Professions in May of 2005.

Cheryl Wills was the first journalist invited to speak before the General Assembly of The United Nations in March of 2011 about the impact of slavery on her family during the UN’s International Remembrance of Victims of the Transatlantic Slave Trade. She is a graduate of the Newhouse School of Public Communications at Syracuse University where she majored in Broadcast Journalism.

Cheryl's lecture will also celebrate the tenth anniversary of the Center for Educational Partnerships.