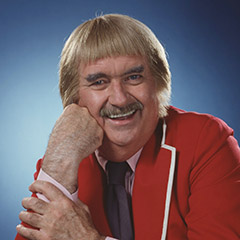 Bob Keeshan once said that in creating his beloved Captain Kangaroo program, he operated “on the conviction that [the audience] is composed of young children of potentially good taste, and that this taste should be developed.”

That respect and admiration for our youngest citizens informed all of Keeshan’s work, from his early days as Clarabell the Clown on The Howdy Doody Show, to his own celebrated Captain Kangaroo, to his later work as a children’s author and advocate. As the Captain, Keeshan earned five Emmy Awards, three Peabody Awards, and one National Education Award during the show’s nearly 30-year run.

Keeshan got his first taste of the television world as a high school student in 1944, when he landed a part-time job as an NBC page. He enlisted in the Marines shortly thereafter. When World War II ended, he attended Fordham on the G.I. Bill, taking classes at the University’s former campus on lower Broadway. “Nobody plans a career in television,” he once said. “I wanted to be a lawyer.” During school, however, he returned to his gig at NBC, where by chance he sat near Buffalo Bob Smith, the future Howdy Doody creator. It wasn’t long before Keeshan was running around a stage as the mute Clarabell, delighting children by spraying his boss in the nose with a seltzer bottle. By 1955, CBS had offered him his own show.

Conceived by Keeshan, Captain Kangaroo entertained millions of children from 1955 to 1984, making it the longest-running children’s television program of its time. Through a quirky cast of characters, like the nature-loving Mr. Green Jeans, the Banana Man, and Slim Goodbody, the show imparted lessons to its young viewers with the gentle, guiding tone of its star. Captain Kangaroo never had a studio audience; Keeshan insisted on talking directly to the children watching at home and making each one feel special.

In the 1990s, he was inducted into the International Clown Hall of Fame and the National Association of Broadcasters Hall of Fame. Keeshan served his community as a school board member and, after his television career, found success as an author of children’s books and parenting advice, like Growing Up Happy: Captain Kangaroo Tells Yesterday’s Children How to Nurture Their Own. In Good Morning, Captain: Fifty Wonderful Years with Bob Keeshan, TV’s Captain Kangaroo, he took readers down memory lane with stories from the beloved show’s historic run.

Keeshan never stopped advocating for kids. He criticized the Reagan administration over its deregulation of the FCC and the resulting unchecked advertising aimed at young people. As spokesman for the Coalition for America’s Children, he worked to make children’s rights a priority for public officials.

In a 1983 lecture he delivered at Fordham’s Graduate School of Education, Keeshan said, “We must all work to motivate our young, to make them feel good about themselves and feel good about us. We must let them know that they are—each of them—unique and of great value to us.”