For the latest news from American Studies, please subscribe to our bi-weekly newsletter here. 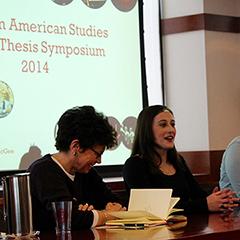 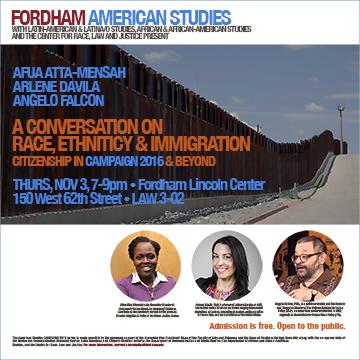 "Race, Ethnicity, and Immigration: Citizenship in Campaign 2016 and Beyond," a conversation with scholar-activists Afua Atta-Mensah, Arlene Dávila, and Angelo Falcón, November 3, 7 - 9 p.m., LAW-3-02

Three scholar-activists discuss the role of race in the 2016 campaign cycle and what can be done to combat the bigotry and xenophobia that this campaign season has both revealed and invigorated.

The American Studies Campaign 2016 series is made possible by the generous support of the Associate Vice President and Dean, Faculty of Arts and Sciences; the Dean of Fordham College Rose Hill; and the co-sponsorship support of the Center for Race, Law and Justice; the McGannon Communication Research Center; Latin American and Latino/a Studies; the Department of Communication and Media Studies; and the Department of African and African-American Studies.