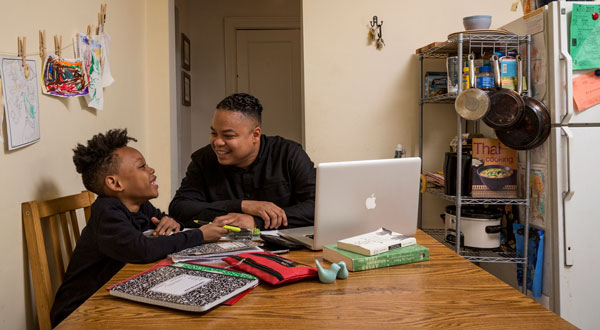 A Single Dad, Studying and Striving

For years, Robin Nathaniel didn’t think about college. He worked at various jobs—in factories, in sales and marketing—while pursuing a music career. He gigged, recorded, and helped create hip-hop events in Manhattan and cities throughout Europe. “But at some point,” he says, “I realized it wasn’t enough. I didn’t have the stability I wanted.” So he moved back to New York, began working at a nonprofit focused on youth development, and became a father. “When Bronson was born,” he says, “my worldview changed.”

Nathaniel excelled thanks to strong mentors, including one who pushed him to go back to school, especially if he wanted the director’s spot he coveted. He enrolled at Fordham in 2013 and within a year received a promotion. “Every year or year and a half since, I’ve been bumped up,” he says.

He received another bump last fall, when he earned the Morton J. Levy Endowed Scholarship from Fordham. As a single father who works full time, he says school is a huge priority and “the stakes are amazingly high,” but it’s a marathon, not a sprint. “The finish line is not as important as every stride being precise: one test at a time, one course at a time.” And the scholarship support, he says, is like a sideline volunteer “offering me a cup of water to get me through.”