“Studying abroad gave me a new sense of independence and truly living on my own. I think through this experience I matured and learned a lot about myself and what I want for my future. “
— Antonia Paruolo, Fall 2016 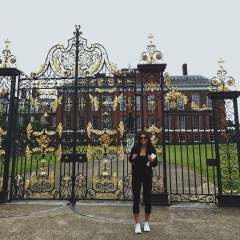 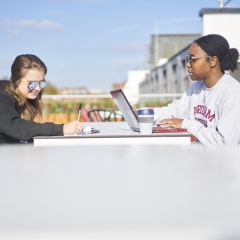 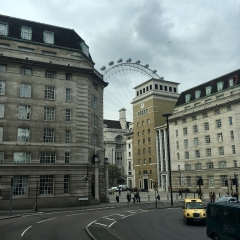 While based at Fordham’s London Centre, students may choose to venture from Cornwall in the far west to the Highlands and Islands of Scotland in the north. Cities such as Edinburgh, York, Durham, Chester, and Canterbury are reachable by an excellent rail network, as are areas of great natural beauty, such as the Lake District, the New Forest, and North Wales. And it’s only a quick trip to the Republic of Ireland or France, Spain, and Italy in continental Europe.

The London Liberal Arts program offers students the opportunity to take major, minor, and core courses at the Fordham London Centre in Art History, Communications, Economics, English Literature, Film and TV, History, Music, Philosophy, Political Science, Theatre, and Theology as well as one module (course) offered at Queen Mary, University of London (Fall Only); City University; or University of Westminster. Students enroll in the equivalent of 15-18 US credits.

Second semester sophomores will take all of their courses at the Fordham London Centre.

For a list of courses with descriptions and syllabi, please visit the London course webpage.

Students are eligible to enroll in one course offered in the GSB London program to satisfy Business Administration minor requirements:

Learn more and apply for the semester internship program.

Please note that the British university academic calendar is different from Fordham's, so in the spring semester particularly the term will begin earlier and end later than a semester at Fordham. For precise dates, please review the information at each university's link below.

City University (Course subject links are listed towards the bottom of the page)
Queen Mary, University of London (Fall Term Only- Search the module catalog as an "Associate Student" to find courses)
University of Westminster (Sign in to view Intranet page; courses are listed by subject in PDF documents)

Students are housed in shared student residences in residential areas in Zone 1 or 2, both of which offer a commute by public transport to classes at the London Centre and your chosen host university. The residences have self-catering facilities with a shared lounge. All of our housing is centrally located within London, in areas with shops and transportation and within reach of city attractions. Read more about living in London.

The London experience begins with a comprehensive orientation that acquaints students with health, housing, travel, academic, and safety information. Program costs typically include co-curricular activities in and around the city of London and one long weekend visit to another European country.

April 14: Last day of teaching at Westminster (last day of exams - May 20)

May 7: Students Depart (except Westminster students)