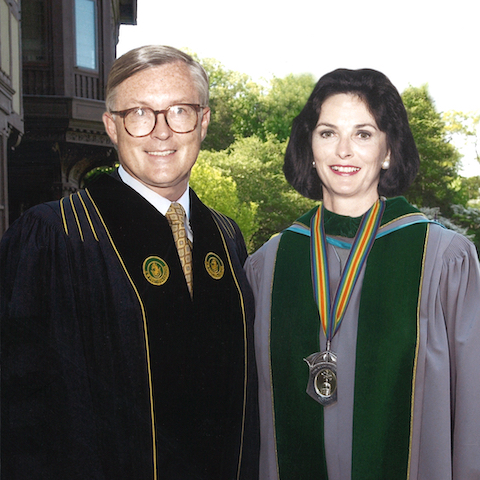 The Mullarkey Chair in the English Department

The Thomas F. X. and Theresa Mullarkey Chair in Literature is the gift of Theresa and Thomas Mullarkey.

Thomas Francis Xavier Mullarkey graduated as an English major at Fordham (FCRH ’54) before serving as a First Lieutenant in the US Army in Korea, 1954-56. He returned to Fordham to take a law degree (LAW ’59) and went on that year to work at Cravath, Swaine & Moore as an associate. He then joined the advisory investment bank Lazard Frères & Co., becoming a partner within two years and eventually chief financial and legal officer. He served as a Fordham trustee from 1980, chaired Fordham’s Board of Trustees from 1986-1989, and served on various university committees, including the Graduate School of Business Administration’s Finance Visiting Committee. He chaired the $155 million sesquicentennial capital campaign until his death in 1993. He was a trustee of Long Island University from 1979, senior vice chairman of Long Island University’s Board of Trustees, member of the Board of Directors of the Manhattan Ear, Eye & Throat Hospital, and a benefactor of the Metropolitan Opera, the New York Virtuosi Chamber Orchestra, and the Tilles Center at Long Island University.

Theresa Mall Mullarkey graduated from Wellesley with a major in Mathematics and went on to work for Merrill Lynch, as well as to found her own financial planning firm, Mall Associates. Like her husband, she has a long career of public service and is a passionate advocate for higher education. Mrs. Mullarkey was appointed Chancellor of the C. W. Post Campus of Long Island University in 1993, and she created the John and Laura K. Mall Scholarship Fund at Wellesley College, where she was a trustee from 1988-2004. She is now an elected trustee emerita of Wellesley.  She also created the Theresa Mullarkey Endowed Scholarship at C. W. Post.  Her interest in encouraging women to study science is expressed in her endowment of associate professorships in Mathematics at Wellesley. In 2015, she was part of the campaign to raise $500 million for Wellesley, at the time the largest ever such campaign for a women’s college. In 1998, she made possible the restoration of C. W. Post’s historic admissions office building, which reopened in 2009 as Mullarkey Hall in recognition of the family’s continuing generosity. The Mullarkey Chair in Literature at Fordham was established by her in memory of her husband and as a continuation of his long-standing support of Fordham and the humanities. She was awarded an honorary doctorate from Fordham in 2005 for her philanthropy and her work in higher education.

As will be clear, these are remarkable records of public service and generosity, and Fordham is lucky to have received such support from the Mullarkeys’ dedication to higher education. Moreover, for Fordham’s English department, Theresa Mullarkey’s interest in the department, a fine balance of engagement and tact, is a matter for special gratitude. She has listened to the various presentations by candidates for the chair she has endowed but has always been firm that the decisions belong with the academics of the department and university. She has also attended the department’s annual Mullarkey Research Forum, and, in years when the Research Forum has joined with the Reid Family Writers of Color program to focus on teaching alongside research, she has contributed to the discussions in the Forum. Her commitment, generosity, and service remain an inspiration and an encouragement to humanities researchers and teachers in challenging times.

Holders of the Mullarkey Chair in Literature:

The Thomas F. X. and Theresa Mullarkey Research Forum in the English Department was first held in 2011 as a place where faculty could hear about each other’s work through short presentations and discussion. It became a regular event thereafter, sometimes combining with the Reid Family Writers of Color program in a joint Research and Teaching Forum, co-organized by the Director of Creative Writing and the Mullarkey Chair. 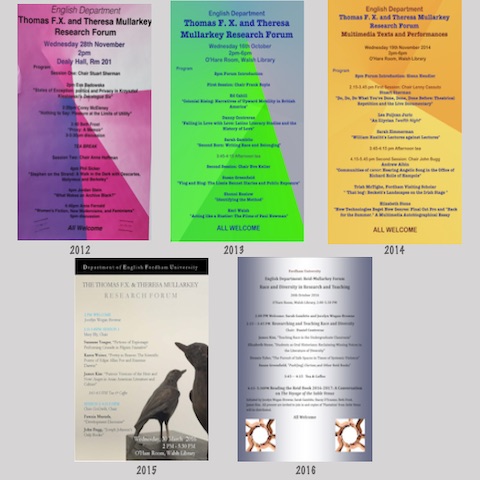