Listening to one another despite our differences is the best way to learn and the only way to become informed leaders. To that end, the Gabelli School embraces our increasingly interconnected world by nurturing a community that seeks common ground, celebrates diversity, and prioritizes inclusion.

As part of its goal to inspire positive global change, the Gabelli School encourages diverse voices and perspectives in its faculty, staff, and students. We are committed to furthering this goal through courses, programs, partnerships, and events that welcome and engage members of the Fordham community regardless of race, color, creed, national origin, ethnicity, gender, gender identity, sexual orientation, age, socioeconomic status, disability, religion, or military status. 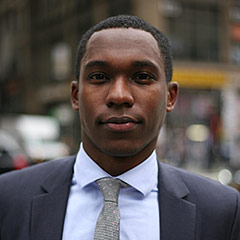 Walter Burnett, BS ’18, majored in finance and interned for Ariel Investments, the largest minority-owned mutual fund in the United States, during his freshman year. Following his junior year, he interned for Goldman Sachs with the leveraged finance group where he is now working full-time. Burnett also helped with a free startup summer camp in Chicago for children with limited options over summer break. The summer experience led Burnett to become an assistant after-school leader with Citizen Schools. Through diversity network platforms like Jopwell and SEO, Burnett attended numerous speaking engagements including the Forbes Under 30 summit as a Forbes Under 30 Scholar. His goal in founding FLIGHT is to help students recognize unique opportunities and allow them to connect with peers and professionals to help further their success.