“Studying abroad has made a huge impact in my life. I have changed in person and character with the experiences that I have encountered"
— Carlos H. Arenivas, Summer 2018

Fordham University offers a number of summer courses in Rome, Italy each year introducing students to the rich history and culture of the city through daily walking tours, museum visits, theater and opera performances, and so much more. Located at St. John's University's Rome campus,the program is centrally located in the Prati district, close to the Vatican and other historic sites. 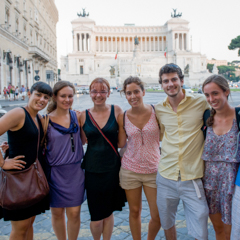 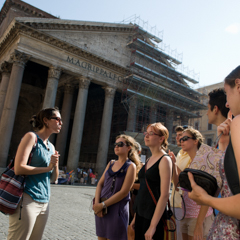 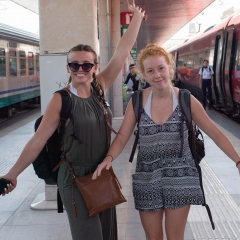 The "Eternal City" is the capital city of Italy and has been inhabited for 28 centuries securing its place in history as one of the origins of modern western civilization. As a global city, Rome has hosted the Olympics and houses the headquarters of a number of specialized United Nations agencies. Today, nearly 3 million people call Rome their home.

The Fordham in Rome program is based at St. John's University's Rome campus, which is centrally located in the Prati District, a very beautiful and residential neighborhood just steps away from important historic landmarks like the Vatican. The area is also home to the Italian Supreme Court and is a commercial and legal center of the city.

This course will examine the art, architecture and culture of Rome over the various epochs of the city's history: Ancient, Medieval, Renaissance/Baroque, and Modern.  Rome once ruled the entire Mediterranean world, and its cultural legacy looms large in Western civilization.  At the heart of this legacy is the city that gave its name to the ancient empire.  For almost two thousand years, Rome has been more than a literal place; it has also been an icon of culture, expressing many different characters depending on the era.  In the ancient world the city epitomized the earthly splendor of Roman civilization.  In the Medieval period its political importance waned, and the city was reduced to a symbolic, spiritual center. In the Renaissance, Humanists and the Papacy sought to re-claim the city's Classical past and re-work it into a new vision of the city as both spiritual and temporal "caput mundi," (head of the world). During the modern period Rome again sought to re-claim its ancient culture while embracing the latest innovation in technology and design. Contemporary Italian art has now moved onto to global stage. There is no better place to study art and architecture than Rome.
During the day Rome will be our classroom as we experience first hand the art, architecture, and culture of four epochs of the city’s history through the lens of its monuments.  Indoor class time will be minimal and our primary mode of exploration will be site visits.
We will be taking advantage of the cultural events taking place in the city, musical and theatrical performances, as well as the rich cultural heritage that the city offers, including the practices of contemporary artists. In the evening we can a catch a movie under the stars in an open-air film festival on a tiny island in the middle of the River Tiber, or attend a music concert in the Circus Maximus, the site of ancient chariot races, or go to the opera performed in the open-air ruins of the Baths of Caracalla.
This course fulfills the Fordham Core Fine Arts requirement.

For more information check out this video.

Documentary Photography: Italy will introduce you to the basic and advanced techniques of digital photography with an emphasis on generating projects relating to the people, architecture, and culture of Italy. The cosmopolitan city of Rome, rich with artistic history, will serve as the source for our explorations.

Our studies will take us from the ancient architecture of the Colosseum to galleries and museums, to the streets of Rome, where we will utilize the wealth of visual stimuli as a resource. The primary objectives of the class are an understanding of photography and, most significantly, the development of a personal vision. Instructional methods are comprised of technical demonstrations, image presentations, film screenings, critiques, and daily field trips.

This course makes use of performance skills for a more in-depth study of Dante’s Divine Comedy, and examines the challenges of classical poetry for the performer.  The study of Dante and his poetry is often incomplete without a sense of the way the poetry sounded in the original.  Often read in translation, or read silently on a page, the images lack the immediacy of the spoken word and the interiority of performance.  The course will not only offer the student an opportunity to examine the language of Dante (grammatical, syntactical, idiomatic, and lexical) but will also provide the context for the study through the engagement of performance (imagination, vocality, physicality). Social and historical contexts are emphasized and characters are studied in depth. Pronunciation and correct diction are a primary focus. Students will work on sections of the Cantos which will be studied and memorized as a component of the course. Students are given the option to perform in Italian or in English. The Cantos are performed at the end of the course.

Students enjoy ultramodern facilities within an historic setting — high-tech classrooms with old-world architectural details; a computer lab with 11 workstations; a wireless broadband network; shared rooms with communal bathroom and kitchen facilities; and on-site laundry facilities. The campus' landscaped courtyard and the cafes and ristorantes of the Prati district provide pleasant workspaces to study the art, history, and culture of the city of Rome.

Participants will attend a pre-departure orientation with both Fordham faculty and study abroad administrators in preparation for their summer experience in Rome. Upon arrival, Fordham faculty and staff will work with SJU Rome staff to lead an on-site orientation to introduce them to SJU's campus, accommodations, culture and safety. Throughout the program, students will rarely be seen in the confines of the classroom, but instead, out and about exploring the richness of Roman life, art and culture through visits to historic sites like the Vatican and the Villa Borghese Gallery through walking tours and special excursions outside the city.

May 30- Arrival and Orientation