“Convincing Spanish-ness”: The Folklorico on Film 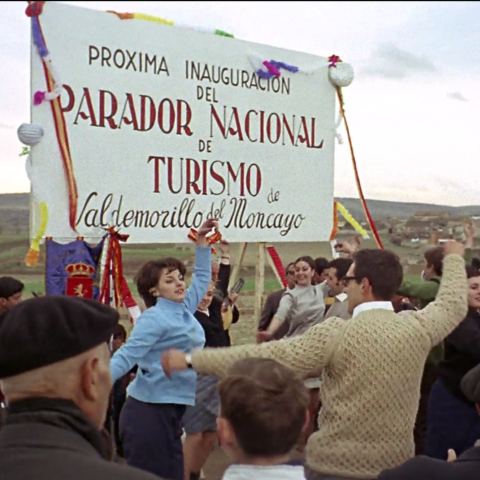 The posters for this popular 1960s tourism campaign depict a national identity at odds with itself: some portray women dressed in ruffled flamenco costumes, Andalusian señoritos and solemn matadors, the imposing robes of Holy Week—and at the same time, others display sunny beaches, women smiling in bikinis, and the stylized block coloring and mod script reminiscent of American ads of the same era. The slogan functioned as a double entendre, signifying at once the country’s cultural distance from and its desire to be part of “Westernized” Europe. Indeed, the 1960s marked a significant time of change for the country. Halfway through dictator Francisco Franco’s reign, these years encapsulated one of the greatest shifts in popular culture of the mid-20th century: the shift from a conservative, Catholic country to a tourist destination “Westernizing” around traditional folkloric images—images that simultaneously attracted tourists and repelled notions of Western acceptance. During this time of social upheaval, Spanish film developed quickly as a method of creatively portraying the moment’s social ills. Coming out of its use as a propagandistic tool in the 1940s, film was incrementally liberated in such a way to reflect the conflicting images of “Spanish-ness” perpetuated by country and society alike. During this era, film recorded way Spaniards saw themselves by portraying the projected “typical Spanish” folklorico alongside the truly typical Spanish— a country in a time of national identity and social, political, and economic change. 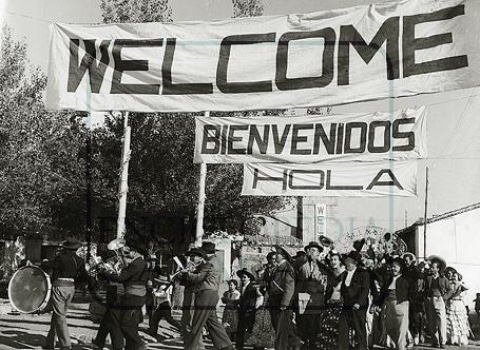 Spain’s cultural shifts in the 1960s come as a result of a mounting history of change at the hands of tourism as an economic necessity. In the 1950s, still reeling from its Civil War and adjusting to a conservative way of life under Franco’s first decade in power, Spain turned to its own images of the folklorico as a means of touristic interest. The folklorico—the flamenco dancer, the matador, etc.— enabled Spain to make a profit off the very stereotypes hindering it from joining “modern” Europe, but it also cemented these ideas in popular culture. In contrast, high-end resorts and hotels ushered in the 1960s, which attested that while Spain was “different,” it was, in fact, “European” (and at a cheaper cost than the beaches of France!). As tourists from more liberal countries began to flood Spain, the tourism boom came with an unexpected twist: a juxtaposition between the conservative, Catholic culture inhabiting a country reliant on tourism, and the very Westernized tourists themselves. Spanish cinema caught this clash in real-time: as Spain’s social culture changed to reflect its assimilation into Western Europe, so too its film industry. Filmmakers went from producing folklorico movies in the 1950s (a holdover from propagandist movies of the 1940s) to satirizing the tourism industry without fear of retribution as censorship laws lifted in the 1960s. And even as movies modernized, the folklorico continued to persist on the screen as self-aware tourist attractions: a lasting nod to the warring faces of Spanish identity and a reminder that Spain is always, in fact, “different.”

This project analyzes four Spanish movies from 1953-1968 within their historical/cultural contests to examine the ways national Spanish identity was shaped by both the “old” and “new” Spain—images of both the folklorico and the modern. In my research, I traced the presence of the folklorico in Spanish films to demonstrate societal shifts in how Spaniards saw themselves through these eras of change. First, I examined the 1950s, when Spanish film produced both folklorico and parody-folklorico movies in a significantly censored political climate and predominantly conservative society. Then, I shifted to analysis of 1960s films, which reflected the “Spain is Different” campaign both in its depiction of tourism and in its portrayal of the folklorico as something produced for tourists. Throughout the films, I examined how the folklorico is presented by Spanish characters, whether for personal fulfilment or for touristic gain. In doing so, I began to define how these conflicting notions of identity in a time of cultural reform came to be recognized within the Spanish national image. In my final analysis of 1968’s El turismo es un gran invento, I saw a synthesis, rather than a separation between or parody of, the “two Spains” broiling within earlier film by the re-appropriation of traditional/folkloric customs by modern young villagers. As we see “desarrollo” (“development”) take hold in Spanish film, we may begin to uncover how the Spanish national identity intersects with its folkloric past as a symbol persistent for the future.