Competitive Growth: How Indianapolis is Facing the Global Urban Hierarchy of Cities 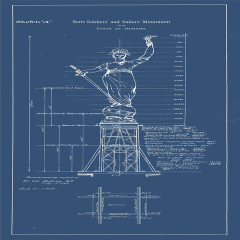 As globalization widens the accessibility to ever more cities, the competition among them for talent, investment, and knowledge-based economic resources begins to resemble a marketplace. The relative success within this marketplace is referred to as the global urban hierarchy of cities. Indianapolis is an example of a mid-sized city economy in the Midwest United States suffering from a weak city brand and poor hierarchy placement relative to size. This paper seeks to provide a case study documenting the strategy that the city of Indianapolis pursued in order to compete with its neighbors and position itself higher within the global urban hierarchy of cities. In doing so, this paper intends to provide insight into mid-placed cities’ decision-making frameworks in the coming years, given the distinctly commercial features of inter-city dynamics, where cities invest in growth not in isolation but to the distinct detriment of those seen as competitors.

The research for this project was hinged on two theories of international political economy. The first is the urban hierarchy of cities, and the second the theory of niche development and path dependence. Both these theories express the dynamics of how city economies interact with one another in a globalized world. The theory of the urban hierarchy of cities expresses how certain cities have an oversized influence in the global economy. Several elite cities around the world are hubs of economic activity, while great stretches of human populations have little economic influence. I sought to understand how Indianapolis was addressing its position within this hierarchy. And while all cities are thrown together in these rankings, competition is concentrated among similar cities in terms of economic size, profile, and geographic proximity. I therefore begin with a geographic and economic analysis to create a list of “peer cities” that Indianapolis is more narrowly competing against in this global urban hierarchy.

The strategy that Indianapolis would use to achieve this aim of moving up in the global urban hierarchy of cities was informed by the second theory of international political economy that motivated this research: niche development and path dependence. Path dependency is the theory that certain geographic areas can become the leader in an economic niche, not based on any intrinsic economic strength, savoir-faire, or resource, but merely by having been the first to engage in the specialization. The history of dominance in an economic sector reinforces itself. This makes it hard to compete with a region that has a historical path of success, hence the term “dependence” on the historical path the region has already taken. This also means that a niche can be created. Therefore, the job of an economic development agency and city government is to take control of this dynamic, by encouraging the development of lucrative niches and creating a “path” forward for a city by fostering a competitive edge in certain economic sectors. Wisely chosen sectors will play to a city’s strengths, but also put it on a path to develop competitively in the future. Looking at the historical and current investment decisions of the city of Indianapolis provided the evidence to concretely describe the city’s strategy.

It was by analyzing these investments that a coherent strategy connecting them became apparent. They were all explicitly designed to grow the economy by attracting resources to the exclusion of its regional competitors. Understanding the city’s perception of the economic landscape as an inherently competitive zero-sum game frames the decisions it made to invest in such an aggressive fashion. The city invested in infrastructure projects, a particularly competitive niche, and even cultural campaigns that were all designed to attract investment in areas that would make it hard to replicate a similar strategy anywhere near the city. Its investment decisions were not just about what was lucrative or beneficial to citizens at present, but what was competitive. This poses the question as to how other similar cities may see their own investment choices going forward. The actions taken by cities like Indianapolis will likely necessitate the incorporation of a competitive perspective into city government decision making for other cities in the future. While the largest spikes, the world’s great urban centers, are unlikely to be dethroned and the smallest cities are unlikely rivals, most of the world’s cities find themselves somewhere in the middle. Among the middle players, Indianapolis shows that there is still room for maneuvering, but it will likely resemble the competitive tactics more commonly seen in the private sector.