The American Horseshoe crab, or Limulus polyphemus, is a marine arthropod that inhabits the Atlantic coastline of North America, from Mexico to Maine (Botton et al. 2017). The limited migration and dispersal are due in part to the short (7-10 days) post-hatch trilobite stage, and the tendency to remain in the intertidal flats and nearshore benthic habitats (Botton et al. 2010). Despite the limited migration of L. polyphemus populations, all throughout L. polyphemus’s distribution range along the Gulf and Atlantic coasts it serves as a host to a marine triclad, Bdelloura candida (Riesgo et al. 2017).

Bdelloura candida is a marine triclad that lives its entire lifecycle on the ventral surfaces of its host, the Limulus polyphemus (Figure 1). B. candida depends on its host for nutrition, where B. candida concentrate on the appendages of the horseshoe crab feeding on the food scraps that the horseshoe crab produces as it eats. B. candida reproduces by depositing stalked cocoons on the gill lamellae (Riesgo et al. 2017).

We collected our data at Plumb Beach-east, Jamaica Bay, Brooklyn, NY, where horseshoe crab spawning takes place between mid-May to early July. Specimens were randomly selected off the beach to avoid skewing our data.

To verify the flatworm species, samples of adult flatworms were extracted and preserved in sea water along with gill leaflets, extracted from freshly deceased horseshoe crabs, and preserved in 70% ethyl alcohol. These samples were photographed using an electron microscope fitted with a camera. A B. candida cocoon is large, has eight developing embryos, and has a short pedicle at its base that attaches itself to the gill (Figure 6) (Shuster et al. 2003). Using these images, we were able to verify that the marine flatworm on the horseshoe crabs of Jamaica Bay were B. candida. 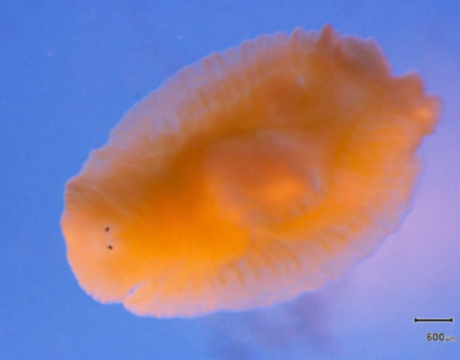 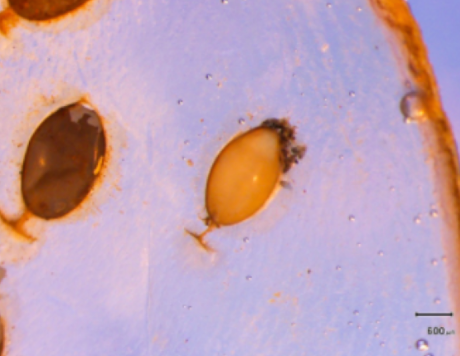 Figure 6: B. candida egg cocoons attached to the inner wall of the gill lamellae. The hatched egg cocoon is a darker brown coloration (left), whereas the lighter tan egg cocoon (right) still have B. candida embryos.