How to Cook and Eat in Chinese: American Chinese Cookbooks as Guides for Authenticity 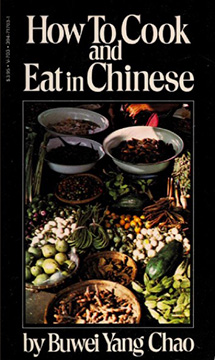 While seemingly an odd archive to search for answers, cookbooks are an apt space to grapple with questions of Chinese diasporic identity and ethnic authenticity. My research first began with twentieth-century Chinese restaurant menus, but, while helpful in identifying the tastes of diners, they did not necessarily illuminate the experiences of immigrant chefs and cooks. Cookbooks, however, were actually authored by the cooks themselves and are encoded with much more than Chinese recipes.

In spite of their widespread readership and immense value as historical texts, few have undertaken comprehensive investigations of these cookbooks. My research seeks to position itself within this gap in scholarship, primarily focusing on the first systematic English language Chinese cookbook ever written: How to Cook and Eat in Chinese by Buwei Yang Chao. Chao is widely considered by culinary authorities to be one of the founding mothers of American Chinese cooking and credited with introducing Americans to new ways of cooking and eating Chinese in America. In her pioneering cookbook, she presented a provocative and unprecedented conception of American Chinese cuisine and reckoned with its authenticity.

In 1945, just two years after Chinese exclusion ended, Buwei Yang Chao published How to Cook and Eat in Chinese. Chao presents dishes in their most basic form, accompanied by numerous variations; in chapter one, “Red-Cooked Meat,” which she defines as stewing with soy sauce, there are twelve distinct iterations of red-cooked meat, ranging from “Red-Cooked Meat Proper: Plain” to “Red-Cooked Meat with Dried Lilies” (Chao 40). The following chapters adhere the same format, providing comprehensive instruction in cooking and eating Chinese.

Chao was commendable for her efforts to teaching readers about Chinese cuisine, but despite her best intentions, her book was culpable in summoning a mythic China - an unchanging, distant memory of a home left behind - and holding it as the standard for all Chinese cooking. Chao consistently strove to demonstrate her credibility as an authority of Chinese cooking in America to emphasize the authenticity of herself and her food. Her recipes reflect this anxiety, clearly denoting what dishes are “Chinese style” or “American style”, while she repeatedly asserts that in American Chinese restaurants, one will rarely receive “real Chinese dishes” (Chao 43). Her repeated insistence that things in America will never be the same seems to reflect a common immigrant experience: the desire for stable norms within the anxiety of alienation from American society. Authenticity becomes the mechanism by which the individual psyche is reassured of its place in some transnational, transcendent Chinese-ness.

But if we define authenticity as “purity,” or an adherence to mythic ideals, even Chinese people in China fail to be authentic. So how do we move towards a more productive definition that allows for compromise, reconciliation, and healing? We can return to the recipes of Chao for direction. She understood her cooking as dynamic; one must make do with the ingredients at hand and substitutions are permissible. Chao admits that she is ultimately less concerned with mimicking the food of her homeland, but rather with the present tastiness of her cooking; as long as the food was tasty, the home cook had prevailed.

By disposing of authenticity as an ideal, one is allowed to think of themselves and others as a whole and better enjoy the food they make. In Chao’s world of Chinese cooking, you can be both Chinese and American simultaneously; one can represent their Chinese identity and heritage while in America – without reference to a distant China. Through honest and unpretentious cooking, considering both circumstance and flavor, one can be completely whole as Chinese in America and create delicious food.