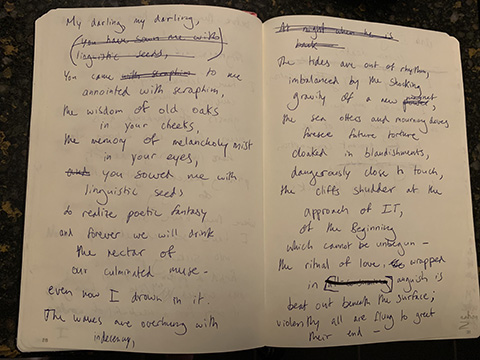 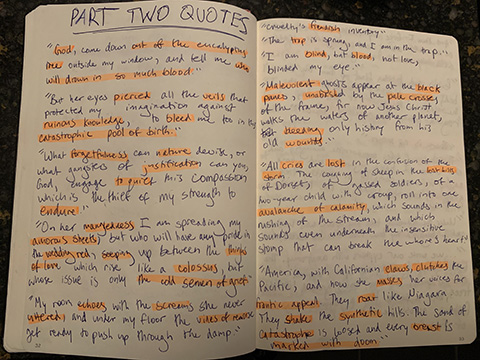 Quotes from Student's original play: The Passion of Smart 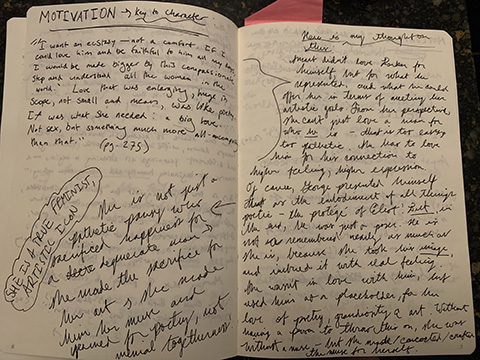 The Passion of Smart character motivation notes by Sophia Swettenham

I have always loved Elizabeth Smart’s poetic prose novella, By Grand Central Station I Sat Down and Wept, a fictionalized account of her love affair with the poet George Barker. Smart depicts her love for George in a highly lyrical and metaphorical way. She also makes frequent use of allusion and intertextuality, comparing her feelings for George with great biblical, classical, and Shakespearean characters.

By Grand Central... is highly dramatic, yet a theatrical adaptation has never been produced. As such, I decided to adapt Smart’s novella as a theatrical piece. The fact that no one had done this may have been due to initial social stigma surrounding the work. Smart bluntly condemns both the bourgeois lifestyle of the era (she came from a provincial, upper-middle class family), as well as the social conventions of the 1930s/1940s. Furthermore, she writes unapologetically about subject matter that was then taboo, including her extramarital affair with George and her intentions to destroy his marriage. As a woman writer refusing to conceal her unorthodox opinions and emotions, the novella (published in 1945) was not recognized until the 1960s.

Moreover, By Grand Central..., although embraced once social mores liberalized, may also have been overlooked because Smart lacks a wide body of work. Furthermore, she may be tacitly and contemptuously regarded as a willing victim of George’s neglectful dominance: Smart devoted most of her life to George although they lived together only intermittently, bore and raised four of his (fifteen) children, and curtailed her literary career in order to support her children. Only once they were grown did she return to her art.

From this perspective, Smart’s story is tragic. Nevertheless, I do not view Smart as a victim. While I acknowledge that she evinces a self-destructive martyr quality, I am astounded by her profundity of feeling and absolute commitment to George – both of which she used to serve her artistry. Elizabeth loved George because he was a poet. She was inspired by - and felt that she could learn from - him. In that way, Smart used George to circumvent her apparent predestination to upper-middle domesticity and as a source of inspiration, as much as he used her for sex. She acted deliberately without apology, and for her own ends. Ultimately, the artistic fruit borne of her obsession left her more well-known than her unwitting muse.

As such, I felt it was important to showcase Elizabeth Smart as an intelligent, independent artist as opposed to a victim. Her work contains such a distinctly female perspective of love, sexuality, marriage (or the lack thereof) that I wanted to draw attention to its strength and vibrancy. I believed that if I could emphasize this, I would help her work resonate with contemporary female audiences.

For my research, I studied closely a memoir of Elizabeth Smart written by her son (Christopher Barker), collections of Smart’s journals, George Barker’s poetry, and By Grand Central.... I knew that in order to adapt the work as a drama, I would have to reflect her voice and story in linear dialogue and largely in my own words. I believed that in doing this, could bring a contemporary perspective to the story.

Each time I read By Grand Central..., I took detailed notes and identified the most significant events and affecting vocabulary and phrases, compiling the latter into a “vocabulary list.” I used this to write my own dialogue and monologues, melding Smart’s voice with mine.

My play, The Passion of Smart, was workshopped and given a staged reading at the St. Lawrence Shakespeare Festival. While workshopping it with professional actors, I learned the process of bringing a new text to life. We worked on “activating” the text in performance, and I ultimately developed dynamic yet poetic voices that, through repeated editing, supported a strong dramatic text that was true to Smart’s poetic prose.

At the staging, I prefaced the piece by explaining Elizabeth’s story and my intention to highlight her strength and devotion to her own artistic development. Afterward, audience members confirmed that they felt that strength in my adaptation of her work and presentation of Elizabeth as a character.

My original intention for Ars Nova was to stage a scene from The Passion of Smart with Fordham Theatre students. Due to Covid-19, we are unable to do this. Instead, I have included the script-version of the scene we were to have presented. Hopefully, going forward, I will find a Fringe or studio venue to stage this play.