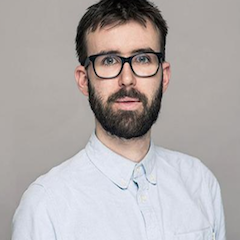 Join us on October 18th as we welcome Johan Farkas, a PhD Fellow in Media and Communication Studies at Malmö University in Sweden, as a part of our Brown Bag Lunch series. The event will take place at the Fordham Law School room 7-119 from 12:30-1:45pm.

Johan Farkas is a PhD Fellow in Media and Communication Studies at Malmö University, Sweden. His research engages with the intersection of digital media platforms, disinformation, politics, journalism and democracy. Farkas has published on these topics in international journals such as New Media & Society, Social Media + Society, and Critical Discourse Studies. His debut book, Post-Truth, Fake News and Democracy: Mapping the Politics of Falsehood was published in September 2019. The book presents a detailed analysis of contemporary discourses of fake news and post-truth, offering both a trenchant critique and call for more inclusive forms of democracy. Farkas is currently Chair of the Young Scholars Network of the European Communication Research and Education Association (YECREA).
Website: http://johanfarkas.com
Twitter: https://twitter.com/farkasjohan