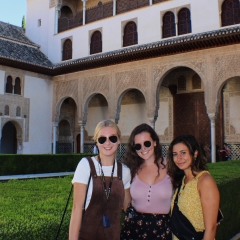 Fordham has designed summer language courses in Spain which allow you to gain cultural immersion and language instruction outside of the traditional classroom. These classes will be attractive to students who want to live with local families and become more proficient in Spanish.

The city of Granada, a recognized World Heritage Site by UNESCO, is one of the most beautiful cities in Spain and the world. It is also the hometown of Federico García Lorca and a center of flamenco culture. The Alhambra Palace, the Sacromonte and Albacín neighborhoods, the Cathedral, and the numerous Baroque churches of the city are testimonies of a rich past, which continues to be alive through its vibrant university community.

Students will enroll in different classes, receiving instruction at their appropriate level of Spanish language competency from beginner to advanced, to upper-level literature courses. Courses follow the same core language sequence and can be applied towards Fordham's major or minor in Spanish. Classes will meet four hours per day, five days a week:

An introductory course that focuses on the four skills: speaking, reading, writing and listening providing students with a basic knowledge of Spanish linguistic structures, vocabulary and culture, which studied interdependently, comprise the Spanish Language.

This course will enhance the reading, writing, speaking and listening skills acquired by students in Introduction to Spanish I or from prior study. It will further promote a deeper understanding of Spanish and Hispanic cultures.

Review of grammar. Intensive practice in conversation and composition. Reading and discussion of graded literary texts. The second semester continues and amplifies the work of the first. Conducted in Spanish.

Review of grammar. Intensive practice in conversation and composition. Reading and discussion of graded literary texts. Conducted in Spanish.

A broad survey of Spanish culture through the study of some of its major literary figures and texts. The course will examine representative texts from important artistic movements in Spain, such as the Renaissance, the baroque, neoclassicism, romanticism, realism and postmodernism. By the end of the course, students will be able to define the main characteristics of these movements and will be familiar with important literary figures, such as Garcilaso de la Vega, Calderón de la Barca, Lope de Vega, Moratín, Bécquer, Larra, Leopoldo Alas, Pardo Bazán, Antonio Machado, Unamuno, Ramón Sénder, Aleixandre and Martín Gaite. Students will also be familiar with Spanish history and its relationship to the cultural field. Prereq: SPAN 2500 or Instructors Permission; Taught in Spanish. Four-credit courses that meet for 150 minutes per week require three additional hours of class preparation per week on the part of the student in lieu of an additional hour of formal instruction.

Students will take an upper-level course at the University of Granada and engage in a number of cultural excursions and activities within Granada, a recognized World Heritage Site by UNESCO, one of the most beautiful cities in the world, and a center of flamenco culture. Students will also participate in two short trips to Sevilla and Córdoba. All activities and cultural visits are organized by the program instructors, who also supervise the academic progress of all students and comment on their weekly reflections. NOTE: Only participants in Fordham in Granada can register for this class.

An integral component of this program is the full immersion living arrangement. Participants will live with a Granadan family. Homestay families provide breakfast, lunch, and dinner, as well as a supportive environment for participants to acclimate to their new surroundings. Families are carefully selected by the Universidad de Granada in consultation with Dr. Rafael Lamas, Director of Fordham in Granada.

Please visit our costs and funding page for more information.

May 29: Students arrive in Granada (they must depart from the US on May 28)