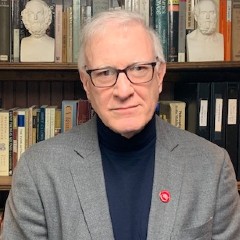 When Tom Hughes, GSAS ’79, gets students in his metaphysics classes at St. John’s University who don’t see the point in studying philosophy, he likes to tell them about his own initial skepticism. Coming out of high school, Hughes had been invited to try out for the New York Yankees and Los Angeles Dodgers, and planned to go straight to the major leagues.

When he didn’t make either team’s roster, he set his sights on a career in law enforcement like his father, a police officer. He enrolled at St. John’s and soon found himself in a required first-year philosophy course.

“I approached my professor and I said, ‘Why do I have to take philosophy? I want to work for the FBI,’” Hughes recalls. “Lo and behold, I fell in love with philosophy. It absolutely grabbed me. And then, the same thing happened with theology.”

That passion for the humanities would not only inspire Hughes to pursue several graduate degrees, but it would inform the way he approached his non-academic career—first in the FBI and then as a lawyer. And that connection between studying the humanities and discovering a range of possible career paths is something he hopes to share with students as part of the Graduate School of Arts and Science’s GSAS Futures, a program that promotes career pathway preparation for Fordham graduate students across the arts and sciences.

Mentorship During a Move

After graduating from St. John’s, Hughes landed that dream job with the FBI, working in the agency’s foreign counterintelligence division, where he received a commendation from the agency’s director for “a security matter of great interest to the bureau and the nation.”

But he also had plenty of free time when he wasn’t working, and he decided to fill it by pursuing a master’s degree in theology at Fordham’s Graduate School of Arts and Sciences.

“It was a great school, a perfect place to study theology,” he says. “It was a very enlightening experience, and I had some great professors.”

He says Transcendental Thomism, a course taught by longtime Fordham philosophy professor Gerald McCool, S.J., who died in 2005, had a “tremendous impact” on him.

After completing his master’s at Fordham, and while still balancing his work at the FBI, Hughes earned a master’s degree in philosophy from Columbia, followed by a law degree from New York Law School. With his J.D. in hand, Hughes left the FBI and began his career as a lawyer, first as a law clerk to a federal judge, and then as appellate counsel for several law firms and as the deputy solicitor general for the New York state attorney general’s downstate appeals and opinions bureau.

Just over 21 years ago, Hughes began working at the Greater New York Mutual Insurance Company, where he currently serves as executive vice president & general counsel, corporate secretary. In that role, he oversees all of the company’s corporate legal activities and regulatory matters. He also finds himself working closely with, among others, the claims, personnel, and underwriting departments.

With all his success as an attorney in the public and private sectors, Hughes says his graduate studies—including an L.L.M. from the NYU School of Law and a second master’s in philosophy from the New School—have been essential to the way he approaches legal cases and his general counsel responsibilities.

“[When]  I wrote briefs and I argued them before the appeals court, there’s no question that the philosophical and theological framing factored into how I viewed and presented legal issues,” Hughes says. “Attorneys with whom I interact many times will tell me they appreciate talking to me about the law because I often frame issues and arguments from a different perspective. They like the fact that they get a different perspective on the law, and on other ways of looking at legal issues.”

Continuing to Study, and to Teach

He has also continued teaching his metaphysics class at St. John’s, where he continues to encourage students to keep an open mind about philosophy even though it is seemingly unrelated to their majors or career goals.

“I am heartened to see my students showing an interest in philosophy that they might not have otherwise shown had someone not told them that courses like philosophy could represent something more to them than simply an academic requirement for school,” he says. “I get a great reward out of seeing this realization in the students.”

One might wonder how Hughes has managed to balance his high-pressure, full-time legal work with his lifelong commitment to learning and teaching. He says it all comes down to passion and a sense of vocation.

“I don’t think you can do all this unless you truly love the things you are studying,” he says. “Over my career I’ve worked an average of 12 hours a day. It’s not just a nine-to-five kind of existence. I have a very loving family that always supports me, which has afforded me the opportunity to pursue my career goals and my studies.

“With the exception of the law degrees, I didn’t have to earn all these degrees, but I did it because I actually love studying philosophy and thinking philosophically. When you love doing something, it makes it a lot easier to do it.”

Fordham in the Family

Hughes’ connections to Fordham have only grown in the years since he studied at GSAS. One daughter, Kathleen, graduated from Fordham College at Rose Hill in 2014 and received her M.S.T. from Fordham’s Graduate School of Education (GSE) the following year. His youngest daughter, Brittany, is currently in her final semester of GSE’s five-year integrated teacher education track, which will result in an M.S.T. degree this May.

In addition to becoming involved with GSAS Futures, Hughes also serves on the GSAS Dean’s Leadership Committee. He says that when he spoke to GSAS Dean Tyler Stovall, Ph.D., about his involvement, he was struck by Stovall’s immediate grasp of the connections between studying theology and philosophy and a successful legal career—and that this shared view of academic pursuits only strengthened his commitment to being an engaged member of the GSAS alumni community.

“I was so taken aback—in a good way—when the dean told me why he had set up a meeting with me,” Hughes says. “I think what Dean Stovall is doing is fabulous. I immediately told him that I’m willing to put in whatever time it takes to do whatever I can for Fordham, for the dean, and for the students.”