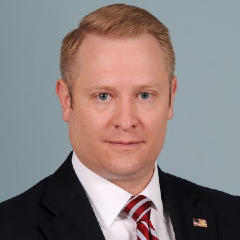 Nowell Agent is a supervisory special agent who has been with the FBI since 2006. He was first assigned to the Indianapolis division, where he specialized in investigations ranging from large-scale corporate fraud to public corruption. In 2009, he was selected as a founding member of a new Cyber Intrusion Squad, with a focus on global advanced persistent threat (APT) cyber actors.

In 2010, he transferred to the Chicago division and continued his career as a cyber investigator, using his experience in Indianapolis to build a robust APT-focused program in Chicago and becoming the primary cyber liaison with many of the Fortune 500 companies and financial securities exchanges in the area. His capstone project in Chicago eventually led to the indictment of numerous Iranian citizens for cyber-attacks against the U.S. financial sector.

In 2014, Nowell Agent was promoted to supervisory special agent and assigned to the FBI Cyber Division’s Asia Cyber Operations Unit. While at FBI headquarters, he worked extensively with the U.S. intelligence community and many foreign intelligence services to combat nation-state actors around the world.

In September 2016, Agent was assigned to the Houston Cyber Task Force and is currently the Cyber Intrusion Program coordinator. A native of Louisville, Mississippi, he holds a Bachelor of Business Administration degree, in banking and finance from Mississippi State University. Prior to the FBI, he served on active duty as a field artillery officer in the U.S. Army and as a financial analyst with Trustmark National Bank.