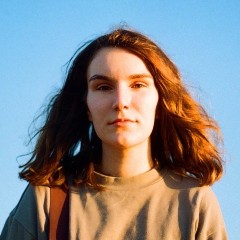 Major: Integrative Neuroscience
Bio: Hi, I’m Alina! I am interested in the interface between developmental neuroscience and genetics. Outside of the lab you can find me taking pictures on my film camera, listening to podcasts, and running long distances.

Title of Research: Selective ablation of the embryonic excitatory cerebellar nuclei leads to reduced cerebellar cortex growth
Mentor: Dr. Alma Rodenas-Ruano
Abstract: Proper cerebellar function requires the numbers of each cell type must be proportioned properly during development. We recently showed that the earliest born neurons in the cerebellum (CB), the excitatory cerebellar nuclei neurons (eCN), dictate developmental scaling of neuron number by supporting survival of presynaptic Purkinje cells (PCs). As one approach we showed that genetic killing of the embryonic eCN by expressing attenuated diphtheria toxin in the eCN using Atoh1-Cre and Atoh1-tTA results in the loss of all three eCN and their of presynaptic PCs throughout the CB, but adult mice show a normal cerebellar cytoarchitecture (Willett et al., eLife, 2019). However, as Atoh1-Cre recombines in extracerebellar nuclei, it is unclear whether the phenotype is primarily due to the loss of eCN. Here, we used En1-Cre and Atoh1-tTA to selectively ablate the eCN to examine the impact of embryonic eCN loss on cerebellar cortex growth. We observed a significant decrease in the number of eCN across all CN in adult mutants compared to littermate controls. Furthermore, PC number and cerebellar size in the midline vermis were significantly reduced in lobules 1-5 and 6-8, but the density of PC and other cell types were conserved in the mutants. Lobules 9 and 10 in which the PCs do not project to the eCN were unaffected. These results suggest that the reduced cerebellar cortex growth is driven by the loss of eCN, and we are now examining the lateral hemispheres to fully characterize the changes in cerebellar cortex growth in these mutants.