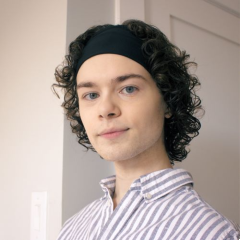 Title of Research: Understanding Identity Among Minority Language-Learners: the Case of Irish in New York
Mentor: Dr. Ayala Fader
Abstract: New York City has been home to a large, vibrant Irish and Irish-American community for hundreds of years; against a backdrop of Irish colonization, emigration, social oppression and eventual privilege, the question of the status of the Irish language, which has been minoritized for centuries, is complex. This study attempts to understand the Irish Language Revival Movement as a transnational, diasporic movement within the context of the Greater New York City area. Although this is an ongoing study, participant observation in a virtual beginner’s Irish language classroom combined with subsequent ethnographic interviews of New York area-based Irish learners and speakers has revealed the diversity of language ideologies, goals, and motivations amongst students of Irish. Further research will illuminate the class, gender, religious, and generational dynamics of New York’s Irish language community; and although many NYC area-based Irish learners and speakers idealize various elements of Irish language and heritage, this view has actually led to sustained interest and participation in New York’s Irish language scene, defying its alleged status of a “dying” or “dead language.” This can lead to evolving ways in which minoritized languages are perceived and in which language revival movements gain new speakers, across time and space.

Title of Research: Student Success and Housing Access in NYC-based Catholic Higher Education Institutions
Mentor: Dr. Vanessa Rotondo
Abstract: Catholic higher education institutions, especially ones located in urban areas such as New York City, contend with increasingly complex issues of student body diversity and success, especially within the context of the ongoing COVID-19 pandemic. Understanding that all aspects of a student’s life, including housing, identity, and marginalization, impact higher education success, this study attempts to illuminate the particular successes and problems New York City-based Catholic colleges and universities have with regards to marginalized students. This study is ongoing, and is comprised of a survey for NYC-based Catholic college students and recent graduates who are marginalized because of their race, ethnicity, religion, sexual orientation, gender, or socioeconomic class in order to understand how students of various marginalized identities find community and success through the lens of housing availability. Early findings have indicated that LGBTQ-identifying students have particularly strong feelings about the steps Catholic universities should take in making housing more accessible and inclusive for marginalized people, and further research will explain these dynamics further and allow the authors to expand on their recommendations, which include adjusting housing policy and examining funding sources to allocate more resources to marginalized students’ housing.