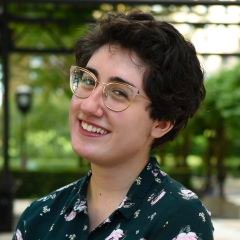 Bio: Gillian Russo is a senior studying journalism and theatre at FCLC. Her research and writing interests center around contemporary theatre and theatre criticism, for which she has been featured in publications including Broadway News, Plays To See, and The Fordham Observer, and before the pandemic she could almost always be found in the audience of one show or another.

Title of Research: Women Of Mass Destruction: Power, Violence, and the Supernatural in Teenage-Girl Theatre
Mentor: Dr. Shonni Enelow
Abstract: The ruthless, supernatural woman is a theatrical character trope that has existed for centuries; the three witches in William Shakespeare’s Macbeth offer some of the most famous surviving examples. These characters have been historically written by men who have painted them solely as villains. However, in the past five years, a wave of non-male playwrights have debuted works with supernatural, violent women as protagonists. In these works, the women in question are no older than eighteen. My research project involves a close reading of four of these works, bolstered by existing criticism and original interviews with each playwright, to determine how this new subgenre of feminist theatre is reshaping the way people think about teenage girls and feminine power. I concluded that the plays, each of which sees its characters struggling with issues like loneliness, guilt, acceptance, and adulthood, complexly interrogates not whether a young woman can or should wield destructive power, but what desperate desires move her to do so. They present a radical shift in thinking about teenage girls, pushing back on stereotypes of them as powerless, or else whose cruelty is relegated to gossip and catty insults. They neither unilaterally champion these girls’ reprehensible acts in the name of “feminism” nor write these women off as monsters to be condemned. Instead, they acknowledge, without passing a hard moral judgment, that the extremes of “girl power” are far beyond common expectations.