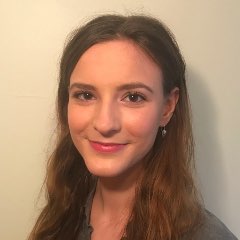 Bio: Julia Ciarcia, from Yorktown, New York, is a senior at FCLC majoring in Integrative Neuroscience on the Cell and Molecular track. She conducted her research over the past year under the guidance of Dr. Catarina Ferreira in the Castellano Laboratory, a Mount Sinai laboratory focused on aging and neurodegenerative disease.

Title of Research: Unraveling the role of tissue inhibitor of metalloproteinases 2 (TIMP2) in the aging mouse brain
Mentor: Dr. Robert Madden
Abstract: Tissue inhibitor of metalloproteinases-2 (TIMP2) is a protein expressed in various regions of the brain which has recently been found to have revitalizing properties in the hippocampi of aged mice. After behavioral tests suggested that TIMP2 knockout (KO) mice have memory deficits as compared to wild-type (WT) mice, gait coordination experiments were performed in order to determine whether the KO mice had any motor deficits which could have contributed to the results. No consistent significant differences were found in the gait of WT and KO mice, suggesting that the differences found in behavioral test performance of WT and KO mice were the result of dysfunction of the hippocampus rather than motor deficits. Additionally, while it is known that TIMP2 expression in the hippocampus declines with increasing age, little is known about how TIMP2’s expression patterns change with age in other regions of the brain. TIMP2 expression in the amygdala and striatum was compared between 2-month-old and 22-month-old WT mice, and while there were no significant differences found in the amygdala, the older mice displayed significantly fewer TIMP2 cells per area in the striatum than the younger mice. These results suggest that TIMP2 expression declines with increasing age in the striatum, just as it does in the hippocampus. Since TIMP2’s role in the striatum has not yet been elucidated, more research is needed to understand how this age-related decline in TIMP2 expression may affect striatal function.