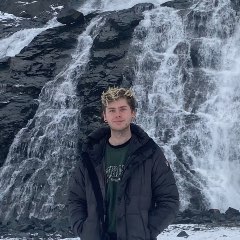 Bio: Karel Van B. was born and raised in Boca Raton, Florida and moved to New York City to pursue an Integrative Neuroscience degree with a Philosophy minor. He is looking to pursue a law degree and specialize in patent law and will utilize his research experience within this field. He conducted his research with the Di Grandi Lab, however had to transition to remote research due to the pandemic. He then chose to look further into the biochemical nature of the compounds relevant to his prior study.

Title of Research: Understanding the Biochemical Nature of Sesquiterpene Lactones: An Approach to Antivirals
Mentor: Dr. Martin Di Grandi
Abstract: As part of the Di Grandi Lab, I was tasked with finding an effective way to synthesize the backbone of a subclass of Sesquiterpene Lactones known as the pseudoguaianolide, however, due to the ongoing pandemic I shifted my research focus into understanding Sesquiterpene Lactones work biochemically. As an approach to antivirals, it was found that the main bioactive group ɑ-methylene-γ-lactone group contains irreversibly alkylating properties to amino acids, as well as enzyme inhibiting properties. By conducting a literature review, I was able to find examples of how these compounds work as antivirals and against other diseases, which can assist in elucidating other aspects of their antiviral properties. It was found that Sesquiterpene Lactones were effective in inhibiting viral replication stages of Influenza A Virus (IAV) as well as inhibiting a crucial protein used in cancer metastasis. Future projects involving Sesquiterpene Lactone’s use could include its use in a wider range of pathogens and disease research and further knowledge of its cytotoxic effects within both diseased and healthy cells.