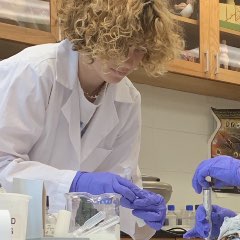 Bio: Frances Murray came to study at Fordham University from Akron, Ohio. She conducts research with Dr. Vernon during the summer and eventually will apply to Medical School. While she is interested in many topics, she is drawn to fertility and reproductive sciences, gastroenterology, endocrinology, and immunology.

Title of Research: Lobster Hemocyte Profiles
Mentor: Dr. Grace Vernon
Abstract: My research focused on a comparative study of lobster hemocyte profiles. Hemocytes are the circulating blood cells in the lobster. There are three different types: large granular, small granular, and hyaline hemocytes. They are important in the innate immune system, so my research is exploring their role in health and disease by studying enzymes present in granules of the cells and observing cell aging. This past summer, I focused on refining techniques and methodology. To answer the question of enzymes within the cell, I used API ZYM tests to locate 19 oxidases in the granules of the hemocytes. Evidence of ß-galactosidase in hemocytes demonstrated possible cell maturity. I found higher amounts of Esterase, Acid Phosphatase, N-Acetyl-Beta-Glucosidase, Alpha-Fucosidase, Trypsin, Naphitol-AS-BI-Phosphohydrolase, and Alpha-Mannosidase. These enzymes are lysosomal and function in metabolism. Additionally, I initially studied hemocyte cell aging by testing for the presence of ß-galactosidase. Based on literature reviews, I will use a Lyse Buffer for invertebrates and a BCA assay to determine ß-Galactosidase activity. A MUG reactive results observable fluorescence of aging cells. This method will allow a comparative assay of cell aging in brown shell diseased lobsters and healthy lobsters. The API ZYM and ß-galactosidase experiments distinguish lobster hemocyte profiles. I hypothesize that the sick lobsters have the same lysosomal enzymes and a high protein concentration because the innate immune system is actively engaged. I hypothesize brown shell diseased lobsters to have younger hemocytes because the cells would be rapidly replaced.