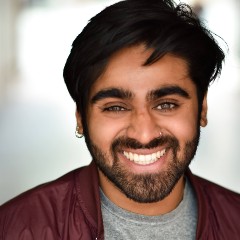 Bio: Siddharth is originally from sunny California, but considers himself a true New Yorker now because he has been to all the Manhattan locations where scenes from the Tobey Maguire Spider-Man trilogy were filmed. In addition to studying acting as a member of Fordham's theatre program, Siddharth also enjoys writing, performing improv and sketch comedy, and brewing cold brew coffee.