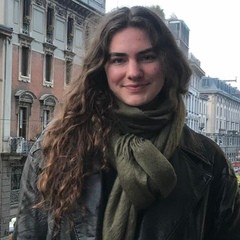 Bio: Rylie Stolze, originally from Eugene, Oregon, is a senior at FCLC majoring in International Studies and Anthropology and minoring in French.

Title of Research: Barriers to Legal Migration Faced by African Migrants
Mentor: Dr. Ron Nerio
Abstract: Since the independence of numerous African nations from European colonial powers in the twentieth century, migration between the two continents, specifically from Africa to Europe,  has been a point of political contention. Xenophobia, language barriers, racism, and the long and expensive journey out of one’s home country are just some of the barriers that African migrants are faced with. Though initially focusing my research on the migration process and local responses to migration as it occurs in Malta, a small island nation along the Central Mediterranean route that has become a common but often undesirable pitstop for migrants, I have shifted my focus to look more broadly at the African migrant’s journey and the barriers faced in trying to achieve successful and legal migration in Europe or elsewhere in Africa. Inspired by my research mentor’s work and focus on migrants in Johannesburg, South Africa, I hope to contrast my research related to migrants in Malta to the experiences of migrants in South Africa. In my literature review thus far, I have found that in both places, we see a rise in xenophobia and an increasingly difficult path to legal immigration, but carried out in different ways due to vastly different socio-political histories in the two countries. My study aims to draw attention to the various difficulties faced by African migrants seeking economic opportunity abroad, which will inevitably become even more pertinent as a result of COVID-19 as well as dramatic changes in global demographic projections.