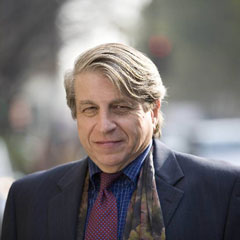 The Fordham community is saddened by the death of Benjamin R. Barber, P.D., distinguished senior fellow at the University-wide Urban Consortium. Barber passed away on April 24. He was 77 years old.

Barber was a renowned international political theorist and an author of many groundbreaking books. As the inaugural distinguished senior fellow of the Fordham Urban Consortium, Barber worked with consortium founder and Urban Law Center faculty co-director Sheila R. Foster and other consortium faculty to launch his brainchild, the Global Parliament of Mayors.

The GPM was launched in September 2016, bringing together mayors from all over the world to promote collective city decision–making across borders. The GPM is now an independent governance body that will continue to advance the rights of cities to lead on global problems that affect them.

“Dr. Barber was not only a brilliant political theorist but also a tremendous force in the global city rights movement,” said Foster.

“In addition to his matchless intellectual gifts and passion for democracy, he was a truly kind and caring human being who brought joy and light to individuals the world over. It was my honor to work with him. I will miss him greatly.” Barber also founded the Interdependence Movement and served as its president. Much of his advocacy and policy work grew out of his scholarship, including his book If Mayors Ruled the World: Dysfunctional Nations, Rising Cities (Yale University Press, 2013), which proposed the formation of the Global Parliament of Mayors. Earlier works include Strong Democracy (University of California Press, 1984) and the international bestseller Jihad vs. McWorld (Ballantine, 1996). In all, he published 18 books, the most recent of which is Cool Cities: Urban Sovereignty and the Fix for Global Warming (Yale University Press, 2017).

Among Barber’s many accolades are the Ordre des Palmes académiques (Chevalier) from the French government, the Berlin Prize of the American Academy in Berlin, and the John Dewey Award. He was also awarded Guggenheim, Fulbright, and Social Science Research fellowships as well as honorary doctorates from Grinnell College, Monmouth University, and Connecticut College.

He held the chair of American civilization at the École des Hautes Études en Sciences Sociales in Paris and served as Walt Whitman Professor of Political Science Emeritus, Rutgers University.