Institute for Women and Girls

Held on March 18, 2022 the Fordham GSS Women and Girls Institute held their annual conference over Zoom. This year, the discussion centered around climate change, featuring women from around the world who are advocating for the future of our planet.

"As the threat of climate change has grown, women leaders have risen to the challenge and launched numerous new initiatives to help reduce our environmental impact. Featuring an overview of the science of climate change and speakers from across the globe, we hope you will leave our meeting inspired, informed, and ready to join these fearless female leaders in standing up for our planet." 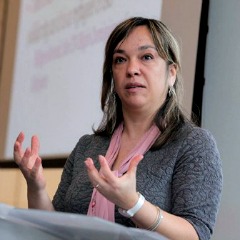 While men made up the majority of the migrant population last year, this year almost 60 percent of refugees coming to Europe are women and children trying to reunite with their husbands and fathers, according to social work experts.

Adriana Sandu, a volunteer at the Cambridge Refugee Resettlement Campaign (CRRC) in Europe, mentioned the statistic in a keynote at a conference aimed at discussing sustainable solutions for the trafficking and violence against women refugees.

The March 19 conference, sponsored by the Graduate School of Social Service’s (GSS) Institute for Women and Girls, was held at the Fordham Law School and drew over 50 attendees.

Sandu, a senior lecturer and research fellow at Anglia Ruskin University, has aided women and children who have fled conflict zones in Syria and Iraq.

“The increase of refugees has surpassed any expectations,” Sandu said, calling it the largest humanitarian crisis since World War II. 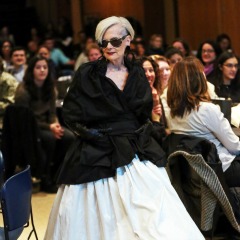 While Super Bowl fans were gearing up for the kickoff on Feb. 7, fashion-forward activists and connoisseurs were gathered at Fordham’s Lincoln Center campus to call upon the fashion world to use its influence for social good.

The event, “Fashion + Sustainable Development + Women’s Empowerment,” brought together designers, models, academics, and fashionistas for a runway show and panel discussion about the unique ways that the fashion industry is embracing sustainable practices and improving social and environmental conditions.

The event was sponsored by the Institute for Women and Girls at the Graduate School of Social Service (GSS) and hosted by Lyn Kennedy Slater, Ph.D., a clinical associate professor at GSS and creator of the popular blog The Accidental Icon. 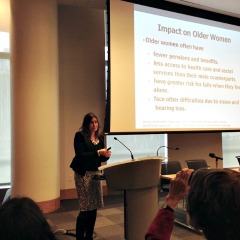 In September of 1995, the United Nation’s Fourth World Conference on Women convened in Beijing, China, and produced a groundbreaking blueprint for women’s rights: The Beijing Declaration and Platform for Action.

Adopted by 189 Member States, the Declaration was a framework for achieving equality and empowerment for all women, including rights to education, health, freedom from violence, and equal pay for equal work.

On March 14, Fordham’s Graduate School of Social Service (GSS) commemorated this momentous event in women’s history with a daylong conference at the Lincoln Center campus titled “Looking Back, Looking Forward: Economic and Health Issues for Girls and Women of All Ages Around the World.”

Fordham’s Graduate School of Social Service’s (GSS) Institute for Women and Girls hosted a program that highlighted the importance of education for girls on a national and global level.

Rachelle Kammer, Ph.D., director of the institute and clinical associate professor at GSS, emphasized the interconnectedness of education and socioeconomic issues.

“Providing girls with an extra year of schooling beyond the average [schooling]can boost the eventual wages by 20 percent,” said Kammer.

For women and girls living in rural areas around the world, life itself is a desperate situation. Catherine Alicia Georges, M.D., works to empower female healthcare providers in rural African communities. Photo by Michael Dames

On a daily basis, millions face chronic poverty, discrimination, and unbridled violence, said presenters at “Empowering Rural Women of All Ages Through Urban and Rural Partnerships,” a Graduate School of Social Service (GSS) conference hosted at Fordham on March 3.

“In many parts of the world, women are so beaten down that they don’t even realize what strengths they have or what resources [exist],” said speaker Catherine Alicia Georges, M.D., chairperson of the Department of Nursing at Lehman College, CUNY, and president of the National Black Nurses Foundation.

Gov. Sarah Palin of Alaska is running for vice president; Condoleeza Rice is secretary of state; Nancy Pelosi is speaker of the house and Sen. Hillary Clinton ran a hard-fought campaign again Sen. Barack Obama during the Democratic primary.

So why is there a lack of women in leadership positions generally?

Roslyn H. Chernesky, DSW, a professor in Fordham’s Graduate School of Social Service (GSS), is trying to find out. Chernesky, who has researched women in management for the better part of her academic career, discussed “The Conundrum of Women in Leadership Positions” on Oct. 27 at the Lincoln Center campus.

The conference was sponsored by the GSS Institute for Women and Girls.

“I looked back on my research over the past 30 years and realized that some of the questions I raised then are still being asked today, even though things have changed,” said Chernesky, former chair of the administration concentration at GSS.

Struggling against poverty, violence, gender inequity, and rigid cultural and religious norms, women are becoming the face of the worldwide HIV-pandemic, said Cynthia Poindexter at the Institute for Women and Girls’ second annual Women’s Symposium.

According to Poindexter, an associate professor at Fordham University’s Graduate School of Social Service, almost half of the 40 million persons infected with the virus worldwide are women; and the numbers are increasing. The number of U.S. women infected with HIV rose by a third between 2001 and 2003. The situation is even direr for minorities in the United States, as black and Latino women account for approximately 80 percent of women with AIDS, yet they represent only 25 percent of the total female population.

“We tend to think of our [U.S.] epidemic as being under control, but the proportion of women to total HIV cases in the U.S. is increasing faster than in any other country,” said Poindexter.