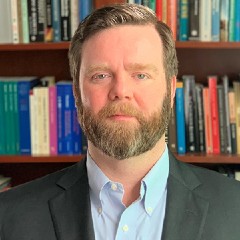 Head of the Research Investment Committee at Bank of America

Jared Woodard, Ph.D., was on course for a career in academia when he became more acutely interested in macroeconomics and global markets. He was pursuing his Ph.D. in philosophy at Fordham’s Graduate School of Arts and Sciences when his focus shifted from contemporary continental European philosophy to analytic metaphysics—as he describes it, the philosophy of science, math, and metaphysical debates.

This more numbers-focused branch of the field, along with an interest in how resources, capital, and labor moved throughout the world economy, led Woodard to spend more time analyzing markets and investments.

“One of the ways that I found my way into finance was through curiosity about political philosophy and issues around global justice,” Woodard says. “One of the things that you talk about if you’re talking about John Rawls or Karl Marx or other political philosophers is questions of justice and distribution. And so I got more and more interested in learning macroeconomics and learning about how global markets worked.”

Woodard, who earned a master’s degree in theology from the University of Edinburgh in Scotland before enrolling at Fordham, believes that the breadth and plurality of Fordham’s philosophy department made this kind of shift in focus possible, noting that its emphasis on history and interdisciplinary thought made it unique among doctoral programs.

“I think they were one of the relatively few philosophy departments that still had their students take comprehensive exams covering the whole history of philosophy, from the ancients all the way through to the modern time,” Woodard recalls. “The requirement to be familiar with ancient philosophy and medieval philosophy, as well as modern and contemporary periods, meant that we were able to understand the common threads and through lines that have driven human inquiry throughout the ages,” a skill that plays out in his analysis of market trends and their context.

While pursuing his doctorate and with his growing interest in global markets, Woodard founded both Condor Options, a firm where he tested investment strategies on large data sets, as well as the publication Expiring Monthly, where he wrote about research into options and volatility trading strategies. This experience led him to post-Ph.D. jobs as a senior equity derivatives strategist at BGC Partners and a global investment strategist at Bank of America Merrill Lynch. His current role, which he began in October 2019, is as head of the research investment committee at Bank of America.

“My task is to help investors think about where to allocate their investments toward different asset classes, like stocks or bonds,” Woodard explains. “And to do that, a big part of my job is to try to make sense of what’s happening in the global economy and in the global market.”

While 2020 has presented challenges, including economic volatility, in the U.S. and throughout the world, Woodard says that there is reason for optimism when it comes to financial markets.

“There are so many people who are eager to make a contribution,” he says. “And if you get help to the people who need it, if you get resources to the students who want to learn, and training to the workers who want to work, I’m incredibly optimistic about the potential of the United States as an economy and as a culture.

“One of our big themes in our department is on the shift from globalization to more local and regional forms of production,” he adds, “being more thoughtful about where we produce things and how we produce them and who produces them. And if those trends continue and you start to see this more thoughtful shift … they can have some really positive implications for markets and investments.”

Woodard has stayed involved with Fordham as a member of the Dean’s Leadership Committee at the Graduate School of Arts and Sciences, and he has come back to campus to speak to students about postgraduate career paths beyond academia. He has also stayed in touch with a number of his professors and friends made through the program, including Joseph Koterski, S.J., associate professor of philosophy and editor in chief of International Philosophical Quarterly.

“Whether it’s the priests on campus or the faculty, I think that there are some connections that were deep enough that I’ve been really fortunate to maintain,” Woodard says. “Current students will reach out from time to time, whether for advice or connections, and I’m always happy to help in that way when I can.”