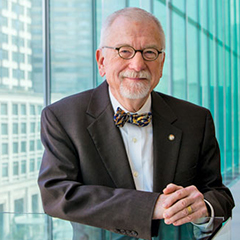 Founded in 2009, The Bernard L. Schwartz Center for Media, Public Policy and Education is devoted to studying America’s embattled newsgathering traditions and investigating solutions for their survival.

William F. Baker, PhD is Journalist in Residence at Fordham University and the Claudio Acquaviva Chair at the Graduate School of Education, and President Emeritus of Educational Broadcasting Corporation, parent company of WNET-TV (Channel Thirteen) and WLIW-TV (Channel 21), where he served for 20 years as Chief Executive Officer.

He has been called an icon of public television for producing some of the industry’s most respected and popular programs, including Bill Moyers Journal, Nature, Cyberchase, and Great Performances. Among numerous honors, he has won seven Emmys and two Columbia Dupont Journalism awards, and was named to the National Academy of Television Arts & Sciences Management Hall of Fame and the Broadcasting and Cable Hall of Fame.

In 2008, he was appointed as a senior research fellow at the Hauser Center for Nonprofit Organizations at Harvard University.