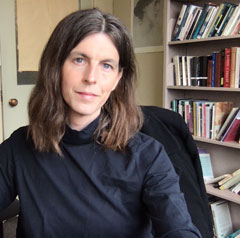 I study histories of labor, gender, and technology in modern imperial Britain. My current book manuscript, Domestic Life on the Lines: Railway Paternalism and the Sexual Politics of Labor in Britain and Colonial India, 1851 – 1922, shows how domestic and sexual relations were governed in early railway districts, and how this governance of intimate matters dovetailed with the ordering of railway workforces. Executives’ efforts to manage in overlapping ways workplace and domestic spheres – a mode of governance I term railway paternalism – significantly shaped the cultures of railway labor and the political practices of trade unionists and nationalist organizers through the Great War.

Paternalistic managers overlaid the familial and laboring identities of those living in railway districts in a number of ways, including by framing their higher-grade employees as father-figures in relation to traveling publics, by compelling such men to contribute to provident and pension funds, and by distributing tenancies in ways that linked housing access to job performance or, in the case of railway widows, to outward displays of respectability. The management of railway housing, in particular, carried some ironic consequences. Newly promoted British and Anglo-Indian railwaymen could cohabit with each other in the bungalows of segregated Indian railway colonies. And respectable, widow-run boarding houses in British railway towns offered bachelors private rooms in which to share meals and beds. Beyond such domestic contexts, alternative sexual cultures took shape in public settings as well, including around Turkish baths, theatres, reading rooms, and other company-sponsored recreational sites. While railway managers claimed to be producing, on a mass scale, respectable railway families, their actions effectively facilitated the distension of certain domestic and sexual norms.

Domestic Life on the Lines initially demonstrates this two-sided quality of railway paternalism by reconstructing the intimate and familial relations maintained in the railway districts of Britain and colonial India. The book then shows how existing sexual cultures of railway labor were politicized – either affirmatively or negatively – by trade unionists and nationalist organizers. The mass movements these groups helped orchestrate through 1906 motivated a range of social liberal reforms between 1907 and 1911. Social liberalism – which entailed state efforts to adapt and generalize some of railway paternalism’s governing technologies – appeared differently in Britain and colonial India, and this bifurcation of social liberalism into distinct colonial and metropolitan forms contributed to divergent histories of class formation along the lines. The book ultimately shows how railway paternalism variously came undone in the volatile wake of WWI, while also tracing the lingering cultural and political effects of this managerial form.

My recent publications include, with Julie Beth Napolin, a discussion of the historical legacies of Denise Riley’s pathbreaking ‘Am I That Name?’ (in History of the Present); an examination of the history of the concept of “looting” (in Postmodern Culture); a historicist reading of the dancing wooden table that opens Marx’s Capital (in Mediations); and a reflection on recent anti-trans legislation and on contemporary shifts in the social recognition of trans life (in South Atlantic Quarterly).

Domestic Life on the Lines: Railway Paternalism and the Sexual Politics of Labor in Britain and Colonial India, 1851 – 1922. (In Preparation with the University of California Press)

With Julie Beth Napolin, “Adjacent Histories: Reading Riley’s Am I That Name? Against Contemporary Debates in Feminism,” in History of the Present 11:2 (October 2021).

“Looting: A Colonial Genealogy of the Contemporary Idea,” in Postmodern Culture 27:1 (September 2016).