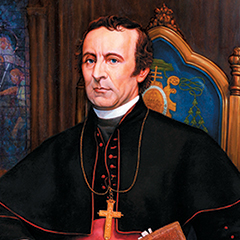 When John Hughes, coadjutor bishop (later archbishop) of New York, established Fordham as St. John’s College on June 24, 1841, he considered it a “daring and dangerous undertaking”—not least because he initially lacked the funds to purchase the land where he saw a great university taking root.

But he persevered. He understood instinctively that education is the key to first-class citizenship for immigrants and to success for all. And he was determined to establish the first Catholic institution of higher education in the Northeastern United States. Thus, a small college in a farming village was transformed into the Jesuit University of New York.

Inspired by the archbishop’s spirit, thousands upon thousands of students, faculty, and alumni have come together through the years—all in the shared pursuit of wisdom and learning in the service of others.

You should already have been redirected to the CAS server. Click here to continue.