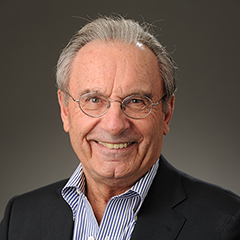 John P. Entelis is Professor of Political Science and Associate Director of the Middle East Studies Program. He received his Ph.D. from New York University and studied Arabic in Cairo, Harvard, and Princeton. He has been awarded several Fulbright awards including a U.S. Department of Education Fulbright-Hays Doctoral Dissertation Research Abroad Fellowship to conduct research in Lebanon, a Senior Fulbright Professorship at the University of Algiers and one at the University of Tunis, and a Fulbright Regional Research Award to Morocco, Algeria, and Tunisia. He has also directed three National Endowment for the Humanities summer institutes and seminars.

Professor Entelis is the author or co-author of numerous scholarly publications on the comparative and international politics of the Middle East and North Africa including: Pluralism and Party Transformation in Lebanon, Comparative Politics of North Africa, The Government and Politics of the Middle East and North Africa, Political Elites in Arab North Africa, Algeria: The Revolution Institutionalized, Culture and Counterculture in Moroccan Politics, State and Society in Algeria, and Islam, Democracy, and the State in North Africa. He has also written scores of book chapters, articles and book reviews that have appeared in the leading scholarly journals in the fields of political science, international relations, Middle Eastern affairs, and North African studies. He has also published analytic pieces in The New York Times and Le Monde Diplomatique, among many others. He is the former editor-in-chief of the Journal of North African Studies and currently serves on its International Advisory Board. Dr. Entelis is President of the American Institute for Maghrib Studies (AIMS), the premier scholarly professional association engaged in North African studies.