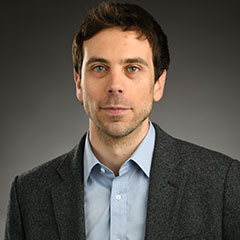 Emanuel Fiano will join the Center for Medieval Studies in the upcoming fall, coming to Fordham as an Assistant Professor of Syriac Studies in the Department of Theology. Fiano, an Italian native, researches the intellectual history of late ancient Christianities, with a particular focus on the Syriac and Coptic traditions and on the history of Christian-Jewish relations. His dissertation, Three Powers in Heaven: The Trinitarian Controversies in Fourth-Century Syria and the Christian-Jewish Continuum, examines the relevance of the fourth-century debates about Christ’s relationship to the Father—also known as Trinitarian controversies—for the so-called ‘parting of ways’ between Christianity and Judaism in the late ancient Roman East.

The fourth century has come to be considered in recent decades as ‘the first century of Judaism and Christianity:’ it was at this time that, under the sway of imperial politics finally willing to enforce one religious truth, Jewry became estranged from a community with which—in spite of protestations on both sides—it was still substantially interfused. The Council of Nicaea, convened in 325 to settle doctrinal dissension within imperial Christendom, inaugurated a period of particular intensity in the Church’s scrutiny of its own ties with the Jewish tradition. Accusations of Judaizing hurled at one’s opponents became a central feature of Christian discourse during the over half-century of heated Trinitarian debate that followed the Nicene convention. In actuality, a variety of theological options for conceptualizing mediation between the godhead and humankind remained available at this time across the divide allegedly separating the two religious communities. More than conflict over specific theological issues—Fiano explains—it was different concerns, epistemic regimes, and intellectual practices that came to affect Jews’ and Christians’ separate self-understandings, contributing to the definitive emergence of Christianity as a distinct religious tradition. In this regard the empire-wide Trinitarian controversies, which unfolded in close connection to imperial power, brought to completion crucial transformations within the Church (underway since the second half of the third century) such as the dogmatization of theological discussion, the shaping of trans-regional alliances, and the recourse to councils and excommunication to settle doctrinal disagreements.

Fiano’s published or submitted research also includes editions of Syriac and Coptic hagiographical texts; and studies of the fourth-century Syriac author Aphrahat, of the Pseudo-Clementine corpus, of the history of Christianity in the Syrian city of Edessa (modern Urfa, in Turkey), of the polemical tenor of the Discourses composed by the fourth-to-fifth-century Egyptian monastic leader Shenoute of Atripe, and of the twentieth-century historiography of ancient ’Jewish Christianity.’ He is currently at work on an article-length examination of the ‘theory of names’ developed in the Valentinian Gospel of Truth, and on a study of Shenoute’s dealings with Judaism.