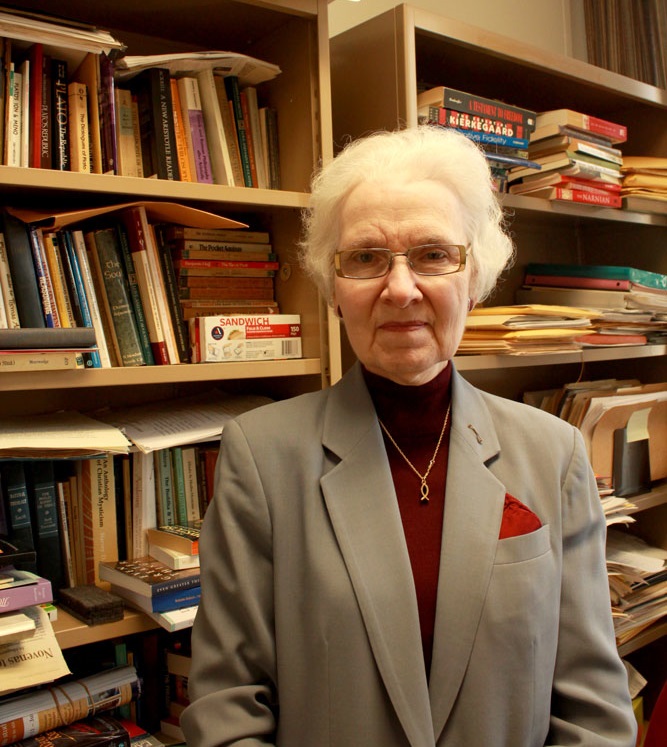 The Center for Medieval Studies regrets the passing of one of our own.  Professor Emerita Astrid O'Brien passed away on April 3, 2016 at the age of 82.  O'Brien retired in 2012 after 53 years of teaching at Fordham's Manhattan campuses.  She earned her Bachelor's degree in Biology from the College of Mount St. Vincent but subsequently turned to her passion of philosophy, receiving her Master's degree from Marquette University and then her doctorate in Philosophy from Fordham.  She began teaching at Fordham in 1959 on the former Fordham campus at 302 Broadway.  There she met her colleague and future husband, Professor Robert C. O'Brien with whom she would go on to teach for over 50 years.

Specializing in medieval philosophy and in particular in the philosophy of St. Thomas Aquinas, Professor O'Brien also was interested in the philosophy of religion and mysticism, publishing in 2010 a book on the late 19th century French mystic, Lucie Christine.  Her academic interests were complemented by her dedication to the classroom.  As her colleague Dominic Balestra, PhD, described her, she was "unhesitating in her commitment and dedication to students and resolute in her commitments to what she believed."  Robert A. Grimes, SJ, Dean of Fordham College at Lincoln Center observed, "She was always extremely interested in her students and would go to bat for them, looking out for their interests both academically and personally."  Dr. Balestra also recalls that she was an active and vibrant member of the American Catholic Philosophical Association in the New York area where she served as treasurer and started a women's group.  "She was a voice there, and a strong one," said Balestra.

In an interview conducted by the Fordham Observer when she retired in 2012, she was asked what her favorite part of Fordham was "My favorite part was teaching.  I personally love teaching adult students because they were highly motivated.  However, I did enjoy teaching all the students I had over the 52 years I have been here... I have also enjoyed the collegial relationships I have made with other faculty members."  When asked what she was most grateful to Fordham for, she responded, "When I was hired as an adjunct professor, a man named Robert O'Brien was hired as a full-time professor.  Who would have known that I would meet my future husband here at Fordham?  He retired from Fordham some years ago.  Regardless, that is one of the biggest things I am most grateful to Fordham for, aside from the opportunity to teach something I am extremely passionate about."  Professor Emerita O'Brien and her husband had three children and three grandchildren.