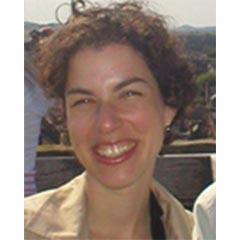 Dr. Nina Rowe, Chair of Fordham's Department of Art History and Music, has been awarded year-long fellowships from the National Endowment for the Humanities (NEH) and the American Council of Learned Societies (ACLS) for her new book project, The World in a Book: Weltchroniken and Society at the End of the Middle Ages. This project, analyzing 22 of the known 56 extant illuminated Weltchroniken, or world chronicles, dating from 1330-1430, seeks to study works typically produced for lower nobility and burghers. This genre of manuscript, with text written in verse in the Middle High German vernacular and richly adorned with extensive illumination cycles, presents events from biblical and ancient history as a seamless narrative. Following in a similar fashion as her previous work on the study of mass-produced ivories intended for a popular market (see below), illuminated Weltchroniken, while by no means indicative of the artistic tastes and sensibilities of the typically silent medieval illiterate majority, do shed light on the more common and wide-spread tastes and desires of the larger segments of the rising middle classes. 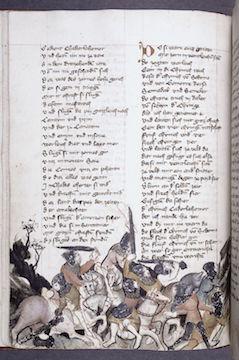 These manuscripts were composed of texts by multiple authors, the best-known of whom is Rudolf von Ems (ca. 1200-1254), but extensive pictoral cycles smooth over the pastiched quality of the text. The genre of Weltchroniken transcends changes in preferences of medium, being found on both parchment and, from 1390, more mass-marketable paper. An example of a paper Weltchronik held in the New York Public Library (Spencer MS 38) inspired Rowe to pursue this line of research. During the NYPL's 2005 exhibition The Splendor of the Word, this piece came to Rowe's attention. Captivated by the style of its illustrations, she had to postpone her study of this book and its genre until the completion of the project she was working on at the time. As explained by Rowe, being non-devotional in nature, Weltchroniken are examples that complicate the prevailing assumption that the pious works commissioned by the highest levels of secular and clerical society represent the majority of Germanic high and late medieval book production. Non-devotional genres are deserving of further, more in-depth study as well, and reveal more about medieval society than devotional works alone can provide. This point, understood amongst scholars of literature and history, is still fraught among art historical academic circles, where the dominant narrative is still driven, by and large, by Enlightenment principles of viewing the medieval era as a time in which piety and religiosity defined every aspect of life at every level of society.

This latest project, while a departure from the subject matter of her previous work on sculpture in monumental cathedral facades (see below), certainly does fit with Rowe's prevailing interests in analyzing how the production, use, and presentation of art challenges our underlying assumptions about medieval social and interfaith dynamics. Neither Christianity nor its rivals and neighbors, at the organizational or devotional levels, were monumental constructs, unified by their opposition to one-another and unyielding or undifferentiated in their hierarchical structures. The farther one looks down the pyramid of medieval society, the more complex the image of that society becomes, and Weltchroniken provide the impetus to look at more than just the pyramid's pinnacle.

The Jew, the Cathedral, and the Medieval City: Synagoga and Ecclesia in the Thirteenth Century (Cambridge: Cambridge University Press, 2011).