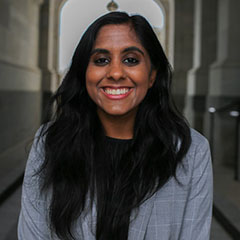 Which career path(s) have you pursued since graduation from Fordham University?
After I graduated from Fordham, I became a field organizer for the Hillary Clinton Presidential Campaign. After the campaign ended, I went to work at the U.S. House of Representatives Democratic Caucus first as an intern, then a staff assistant, then a scheduler, and currently as a caucus assistant.

What do you like about the work you are doing now?
I work in a leadership office, which means I get to work not on behalf of one particular congressional district, but rather all democratic congressional offices. I appreciate that I get to be a part of helping members of my party in general, and, by extension, people in general. I have also been able to learn about the legislative process at large through my interactions with multiple member offices and other leadership offices.

How did your experience at Fordham and in particular the political science major help you prepare for your current career? Was there a specific course or extracurricular activity that influenced your career development?
Strangely enough, the extracurricular that influenced my career development was unrelated to politics. During my freshman and sophomore years, I participated in a program called Jumpstart Bronx, which allowed me to work in a pre-k classroom part-time. At the time, I knew that I had a strong interest in politics, but I doubted that I wanted to pursue it professionally. I had a hard time envisioning a pathway for myself that led toward a satisfying and stable career. My only concrete requirement for what I wanted to do professionally was that I wanted to help people. Through my involvement in Jumpstart, I was able to parse out what that requirement meant to me.

In the Headstart classroom I was assigned to my freshman year, the students I worked with barely needed my help. Almost all of them had already outpaced the curriculum that Jumpstart provided. My sophomore year, I was assigned to a more general community school pre-k classroom. In contrast to the students in previous classrooms, the students in my new classroom struggled with the curriculum that I was teaching them. It was clear that my new students did not have the same level of support as the students in my first classroom. The particular school I had volunteered in my freshman year provided care to its students from 6 months to 4 years and offered layered services to the parents of their students. The students I was working with lacked those kinds of resources and it showed in the classroom.

While it is anecdotal, the effect that the difference in resources had on students made me reexamine how I could best “help” them. While I enjoyed working directly with them every day that I was far more interested in changing the policies that affected their lives overall. This realization gave me the direction that I needed during a time period where I felt professionally confused. Many undergraduates go through a lot of indecision about their future, which is why I strongly suggest using internships, campus activities, and volunteer positions to flesh out possible directions.

Please describe any internships you held as an undergraduate student that were helpful/relevant to your subsequent job search.
My internship at the Hilary Clinton campaign resulted in me getting my first job as a field organizer, and my internship at the Democratic Caucus resulted in me getting my first congressional job. I cannot overstress the importance of internships for getting an entry-level job in politics. On Capitol Hill, it is an unwritten rule that for most staff assistant jobs (the most common entry-level position) you need to have experience as a congressional intern. It is extremely common for offices to hire their former interns or to help their interns get jobs in other congressional offices.

What advice would you give for students who aspire to hold a job like yours?
If you want to get a job in politics, you need to be prepared to take a few risks. Many congressional staffers, myself included, got their first job only after they moved to D.C. without a job. They saved up money and worked second jobs in addition to their full-time internships. For me, this felt like a huge personal and financial gamble. However, the professional payoff made it worthwhile for me.

It is not enough to take an initial risk; you also need to be prepared to work hard. A lot of congressional internships and entry-level jobs in politics are about paying your dues. More than likely you are going to work long hours and the work that you do is not always going to be the most challenging. However, in a congressional office, every task performed is essential and taking the small tasks seriously is important.

You also need to know your own goals and your own value. The work performed by congressional staffers, especially at the entry-level, is tedious and far from glamorous. It can be easy to lose sight of what initially inspired you to work in politics and public service in the first place. However, every role, no matter how small, is a piece of something much bigger.

Finally, you need to be prepared to lose. Rightfully, no one in politics has a guarantee that they will get to keep the job they have or stay in their office. This is especially true with campaign jobs and in the House of Representatives, where members face re-election every two years. To a degree, you can try to plan your life with a job in politics, but you ultimately need to prepare for the possibility of that plan changing.