If you have any questions about Fordham Club Softball or if you would like to make a donation, whether it be a financial contribution or equipment, please reach out to Linda Powell at clubsoftball@fordham.edu. 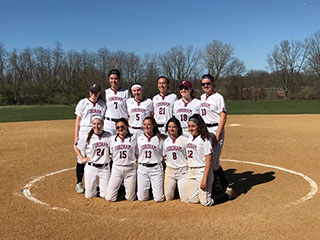 Fordham Club Softball was established on campus as a prospective club in the spring of 2017 under the leadership of Kelsey Coppinger. In the fall of 2017, the team began scrimmaging other club teams in the area, including UConn and Hofstra.

After two semesters as a prospective team, Club Softball became an official Fordham club team in the spring of 2018. While continuing to scrimmage other universities, Club Softball worked towards becoming a member of an official club softball league. On March 30, 2018, Fordham Club Softball so joined the National Club Softball Association and was designated as part of the North Atlantic – North conference.