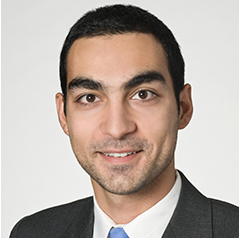 Sepehr Shahshahani teaches and writes in the areas of intellectual property, civil procedure, and law and social science. His research applies formal and quantitative methods to the study of law, focusing on judicial decision making and the role of courts in policymaking. It has investigated, for example, the impact of judges' religious affiliation on their decisions; the interaction of interest groups, Congress, and the courts in making technology policy; the effect of appellate standards of review on factfinding and lawmaking; the horizontal diffusion of legal doctrine; and the influence of particular case characteristics on the development of general law. His work has appeared or is forthcoming in peer-reviewed journals such as the Journal of Law and Economics, the Journal of Law, Economics, & Organization, the Journal of Legal Studies, the Journal of Empirical Legal Studies, and the Quarterly Journal of Political Science, as well as in law reviews such as the Journal of the Copyright Society of the U.S.A. and the Minnesota Journal of Law, Science and Technology. Sepehr completed a Ph.D. at Princeton University, where he was a Charlotte Elizabeth Procter Honorific Fellow. Before embarking on an academic career, he was a litigator at Paul, Weiss, Rifkind, Wharton and Garrison LLP in New York and a law clerk to Judge William E. Smith of the U.S. District Court for the District of Rhode Island and Judge Ronald Lee Gilman of the U.S. Court of Appeals for the Sixth Circuit.

The Fact-Law Distinction: Strategic Factfinding and Lawmaking in a Judicial Hierarchy, 37 Journal of Law, Economics, & Organization 440 (2021)

Religion and Judging on the Federal Courts of Appeals (with Lawrence Liu), 14 Journal of Empirical Legal Studies 716 (2017).