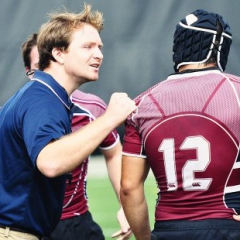 While Andrew Gheraldi served as Head Coach, Fordham Rugby found victory at the Cherry Blossoms Tournament in Washington, D.C., won the Championship of the METNY Rugby Football Union over the USMA at West Point, reached the Final Four of the NRU Playoffs, became nationally ranked by RugbyMag, and helped found the Empire Rugby Conference. Over the Summer of 2012, Coach Gheraldi was promoted to the position of Program Director from which he administrates the future of Fordham Rugby and coordinates closely with the Fordham administration and Fordham Alumni. A Fordham Rugby Alumnus himself (Class of 2005), Director Gheraldi also coaches the NYPD Rugby 7's Squad and plays several positions on the Old Maroon Men's Club of Fordham Alumni.