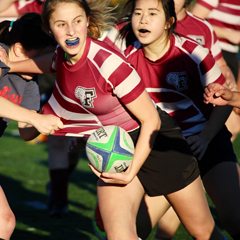 Fordham Women's Rugby began in 1995 and has continued to grow since the club's inception. In 2004, Women's Rugby won the East Coast Rugby Women's Collegiate Championship title. Fordham women were crowned champions at the Big Apple Tournament two years in a row. The current team competes in Division III of the Tri-State Rugby Conference against teams such as Drew University, Molloy College, University of New Haven, and SUNY-Maritime College.

Fordham Women saw their hard work pay off in the 2011-2012 season by making the playoffs of the Metropolitan New York Rugby Football Union's Women's Division III tournament to conclude conference play in the fall of 2011. We continued this momentum by placing 3rd at Regionals in November 2015. In the 2017-2018 season, we placed 4th at Regionals during the fall season! Every spring, Fordham attends the Beast of the East Collegiate Rugby Tournament in Rhode Island and repeatedly proves themselves as one of the competitive DIII teams in the Northeast.

With every incoming class, the team continues to grow and progress, with a huge gain in members after a stagnant mid-pandemic season in 2020-2021. The Fall 2021 season concluded with a squad of 25 dedicated players, most of whom were very new to the sport and are now proud to call themselves sisters-in-arms on the pitch. With great effort and determination on the field, coupled with strong team spirit and camaraderie off the field, this team has a promising future here at Fordham.

Fordham Women's Rugby encourages new students and prospective players to give rugby a try, regardless of any level of experience. If you are interested in hearing more about the team or are interested in playing, contact one of our officers or shoot us an email!