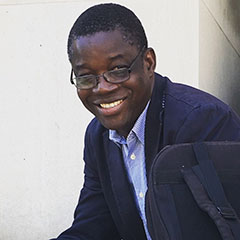 Isaie Dougnon’s research examines migration, work, and lifecycle in West Africa. Before coming to Fordham, Isaie was a professor of Anthropology at the University of Bamako in Mali where he taught courses on the anthropology of development, migration, and local knowledge. After publishing his first book, Travail de Blanc, Travail de Noir (Karthala 2007), Dr. Dougnon published several articles contributing to current debates on child labor. His work uses historical and anthropological approaches to offer a local perspective on labor and migration in colonial and post-colonial Africa. From 2008-2012, he directed the UNESCO-University of Bamako research program Water and Migration. He is currently finishing a book manuscript, Crises of Passage, which examines how Malian civil servants engage in secret societies and ritual practices to overcome career impasses and moral crises. Dr. Dougnon has contributed to the debate on the Malian political and humanitarian crisis of 2012 by publishing essays in local and international newspapers and journals. His most recent research examines the crisis of academic freedom and higher education in Mali after the end of dictatorship. Hehas held several fellowships, including at the Humboldt Foundation, Re:Work (Humboldt University, Berlin), and the Fulbright Foundation. His work has appeared in many journals and edited collections, including Humanity, African Economic History, African Identities, and Hommes & Migrations.