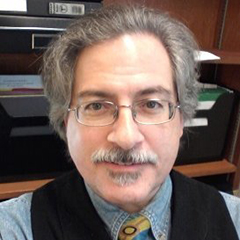 My primary research interests are twofold: (1) development of new or improved organic synthetic methods with emphasis on chemo- and regioselective reactions of epoxides and epoxide synthesis, and (2) devising novel, project-oriented and discovery-based undergraduate organic laboratory experiments that often combine synthesis and mechanistic discovery.

Reactions of Epoxides. We found that LiCN can be conveniently prepared by reaction of MeLi and acetone cyanohydrin; solvent evaporation aﬀords a cyanide–acetone complex that can be stored indeﬁnitely in a desiccator. Reaction of the complex with epoxides in THF cleanly aﬀords the corresponding beta-hydroxy nitriles in good yields and in greatly shortened reaction times in comparison to previous reports by our group and others. This method permits an eﬀective one-pot, two-step synthesis of 1,3-amino alcohols by in situ hydride reduction of nitriles obtained from reaction of epoxides with LiCN (1).

Some years ago we developed the reagent dilithium tetrabromocuprate for the selective conversion of epoxides to bromohydrins in organic solvents (2). The reagent has been found useful by others in their synthetic work and was eventually made commercially available. We are currently examining the reaction of epoxides with dilithium tetrahalocuprates and copper (II) halides using environmentally benign solvents (water, PEG) and without solvent.

Epoxide Synthesis.The Corey-Chaykovsky reaction is a common method for the preparation of epoxides from aldehydes and ketones using methylsulfonium and methyloxosulfonium methylides as methylene-transfer agents. In the traditional protocol, methylides are pre-formed by treating sulfoxonium or sulfonium salts with NaH in dry DMSO or DMSO/THF mixtures. We found that the salts form stable, dry mixtures with KOt-Bu and NaH, respectively, which remain stable upon prolonged storage (>1 year). The corresponding methylides are formed and reacted in situ upon addition to DMSO solutions of carbonyl compounds, cleanly affording epoxides via the Corey-Chaykovsky reaction in good yields with very short reaction times (3).

In a modification of the Corey-Chaykovsky cyclopropanation reaction, we subsequently found that treatment of various electron-deficient alkenes in DMSO with our “instant methylide” mixtures cleanly afforded the corresponding substituted cyclopropanes in good yields and short reaction times (4).

We have devised two operationally straightforward, experiments that can be presented to students in the form of mechanistic puzzles that probe the stereoselectivity of epoxide reaction and formation: a diastereospecific synthesis of an epoxide from a bromohydrin (5), and the regioselective alkylation of another epoxide with PhMgBr (6). Both experiments complement the increasing number of puzzle-oriented undergraduate experiments combining synthesis and mechanistic discovery that continue to appear in the chemical literature.

We have also developed a project-based, undergraduate experiment that probes the diastereoselectivity of the reaction between a Grignard reagent and a common, inexpensive alpha-chiral ketone (7). It is an interesting alternative to traditional Grignard experiments, is operationally straightforward and easily performed in large lab courses, and introduces students to pi-facial discrimination by having them establish the stereochemical course of kinetically controlled nucleophilic addition to a carbonyl.

In collaborative work initiated by Prof. Saba of our department, we have developed an experiment for which students use reactions found in standard textbooks to prepare two structurally similar heterocyclic amines: one achiral, the other chiral (8). NMR spectroscopy clearly indicates that the nuclei of the methyl groups of the former and latter are enantiotopic and diastereotopic, respectively. Students must explain differences in the NMR spectra, leading to a discussion of prochirality and the topicity of ligands within a single molecule. This operationally straightforward experiment is a meaningful exercise in chemical synthesis and spectral problem solving, and students sample the benefits of collaborative work by dividing up the synthetic and analytical tasks and then sharing their data.

In another experiment, we introduce students to dimethylsulfoxonium methylide (DMSY) epoxidation of aryl and nonconjugated aliphatic aldehydes and ketones without revealing that DMSY cyclopropanates enones by Michael-initiated ring closure (MIRC) (9). Each student performs the reaction of DMSY with one of nine carbonyl compounds, including four enones, and then analyzes the spectral data from their reaction product in comparison with spectra of their carbonyl substrate. The spectra of products from aryl and nonconjugated aldehydes and ketones clearly indicate carbonyl epoxidation, whereas spectra of products from enones unexpectedly (to the student) display features that indicate the presence of an unreacted carbonyl and the absence of alkene functionality. Identification of the latter products as cyclopropyl ketones leads to a discussion of conjugate addition and MIRC, and it stresses the avoidance of making false assumptions regarding the outcome of chemical reactions.

Student goals for our most recently developed experiment mirror a real-world problem that might be encountered by a natural products chemist: establishing that two diastereomeric iridoid lactones (nepetalactones) are the principal components in N. cataria (catnip) essential oil and identifying them by a combination of chemical and analytical methods to determine their ratios in a variety of commercial samples (10).

Publications (student names are in bold)