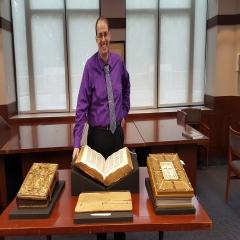 Research Interests: My works concerns interfaith relations and the political culture of the late medieval Iberian Peninsula. I am most interested in the iter per Hispaniam, the ways that ecclesiastical and secular leaders constructed identity and authority by connecting Iberia with the Holy Land.

Publications:
With David Howes, “An Indulgence with William of Adam, Archbishop of Antivari and Author of How to Defeat the Saracens,” The Crusader States, posted February 2019, http://www.crusaderstates.org/indulgence-of-william-of-adam.html.
“Late Medieval Mediterranean Apocalypticism: Joachimist Ideas in Ramon Llull’s Crusade Treatises,” The Hilltop Review 7, no. 2 (2015): 30-45. http://scholarworks.wmich.edu/hilltopreview/vol7/iss2/5.