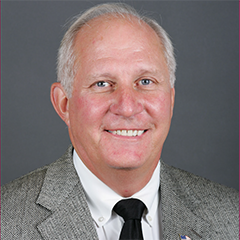 Frank McLaughlin, FCRH ’69, first made his mark on Fordham athletics nearly 50 years ago as a standout basketball player and team leader. Later, while serving as director of athletics for nearly three decades, he brought new pride to Fordham sports and helped bring out the best in student-athletes on the playing field and in the classroom.

In light of all he has done for the University, we invite you to support a new fundraising effort that will memorialize Frank’s legacy and advance the athletics program to which he devoted so much of his professional life.

As Frank’s career approaches the half-century mark, we ask you to join us in celebrating his many contributions to the University and its teams by making an investment in the future of Fordham athletics.

We seek to raise $2.5 million in cash commitments to:

Upon reaching this fundraising goal, we will rename the court in honor of Frank and his family.

The Frank McLaughlin Family Basketball Court, with these enhancements, will continue to be known as one of the most vibrant, challenging places to play in the Atlantic 10. It will serve as a tribute not only to Frank but also to the McLaughlin family legacy at Fordham, first established by Frank and his brothers Walter, Jackie, and Tommy and carried on today by Frank and Susan’s three daughters, all of them Rams: Tara Marie (Class of 1999), Mary Heather (Class of 2002), and Colleen Patrice (Class of 2005). A Distinguished Career in Athletics Leadership

The McLaughlin family has a long and proud history with Fordham. Frank is one of four brothers who all graduated from Fordham Prep and who all played basketball in the Rose Hill Gym; his brother Walter was also a Fordham University graduate (Class of 1953).

Playing on the basketball team for all four years of his undergraduate career, Frank led the Rams to berths in the National Invitation Tournament in 1968 and 1969 and served as team captain in his senior year. The team won 23 straight home games— never losing at home during his junior and senior years—and overcame formidable rivals including Pittsburgh, Boston College, Seton Hall, Syracuse, and Georgetown. After his senior year, Frank was drafted by the New York Knicks.

Returning to Fordham for the 1970–1971 season as an assistant to legendary coach Richard “Digger” Phelps, he helped guide the Rams to a 26-3 record and an NCAA tournament appearance. Upon being named athletics director at Fordham in 1985, he pledged to honor the University’s “serious commitment to have athletics done the right way,” The New York Times reported.

He honored that commitment to the fullest. During his tenure, the Rams won 26 conference championships—in softball, swimming, football, and other sports—while achieving academic distinction as well. Fordham consistently ranked high in the number of student-athletes named to the Atlantic 10 Commissioner’s Honor Roll, and routinely placed among the national leaders in NCAA Academic Progress Rates.

For his accomplishments on and off the court, Frank was named to the Eastern College Athletic Conference Hall of Fame, the Fordham Athletics Hall of Fame, the New England Basketball Hall of Fame, and the Catholic High School Athletic Association Hall of Fame. Since stepping down as executive director of athletics in 2012, Frank has served as associate vice president of student affairs for athletic alumni relations and external affairs, and as athletic director emeritus. In these roles, he has strengthened relationships—both old and new—with alumni and donors, and played a vital role in securing funding that keeps Fordham teams competitive.

Help Us Honor the McLaughlin Legacy at Fordham

Thank you for your consideration, and for your support of Fordham athletics and our friend, Frank.

*Denotes current or past University Trustee.