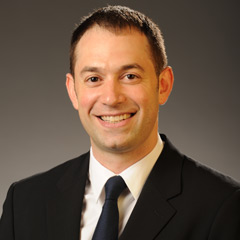 The New Republic
The Stranger

Joseph Landau is the Associate Dean for Academic Affairs and a Professor of Law at Fordham Law School. He writes at the intersection of constitutional law and civil procedure, and he has long taught both of those subjects to first-year students at Fordham. He received the Fordham Law Dean’s Distinguished Research Award for 2020-2021 and Fordham Law’s Teacher of the Year Award in 2012-2013 and again in 2019-2020. In 2012, he was named one of the Best LGBT Lawyers Under 40 by the National LGBT Bar Association.

Professor Landau graduated from Yale Law School in 2002 and clerked for the Hon. David Trager of the U.S. District Court for the Eastern District of New York and the Hon. Betty Binns Fletcher of the U.S. Court of Appeals for the Ninth Circuit. Prior to joining the Fordham faculty, he was an associate at Cleary Gottlieb Steen & Hamilton LLP, where in addition to specializing in securities litigation he co-directed the Firm’s pro bono practice group in immigration and international human rights (including Guantánamo Bay litigation). From 2010 to 2013, he was Board Chairman of Immigration Equality and the Immigration Equality Action Fund. Prior to law school, Professor Landau was the Assistant Managing Editor at The New Republic magazine in Washington, D.C.