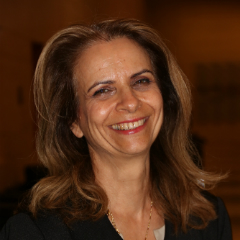 Professor Shlomit Yanisky-Ravid, PhD is a professor of Intellectual Property (IP) Law, focusing on the challenges of advanced technology, artificial intelligence (AI), blockchain, cyberspace, privacy and competition laws, from theoretical perspective as well as on comparative and international aspects.

Prof. Yanisky-Ravid is a Visiting Professor at Fordham Law (from 2012), where she teaches the courses “IP and the Challenges of Advanced Technology: AI and Blockchain” and previously: "Beyond IP: Theoretical, Comparative and International Perspectives". Professor Shlomit Yanisky-Ravid is the Head of the “IP - AI & Blockchain Research Project" at Fordham Law CLIP working with Prof. Joel Reidenberg. Professor Shlomit Yanisky-Ravid's research focuses on Intellectual Property (IP) Law, focusing on the challenges of advanced technology, artificial intelligence (AI), blockchain, cyberspace, privacy and competition laws, from theoretical perspective as well as on comparative and international aspects. She is also a Law Professor Research Fellow at the Yale University Law School, ISP, since 2011, when she completed post-doctoral studies at Yale Law School, and where she conducted two seminars: "Law and Society In Israel: Contemporary Issues" and "Advanced Legal Studies for the VR Graduate Program".

Prof. Yanisky-Ravid is a full time Senior Law Faculty Member at the Ono Academic College, Law School, which is the largest law school in Israel, and the founder and director of the Shalom Comparative Research Institute, Eliyahu Law and Tech Center at Ono. Professor Shlomit Yanisky-Ravid has published many articles and books and has won awards and scholarships for her works. Recently, she researched the challenges of advanced technology, focusing on AI and blockchain and its impact on the legal regime. One of her studies, titled "Generating Rembrandt: Artificial Intelligence, Copyright, and Accountability in the 3A Era—the Human-Like Workers are Already Here—A New Model", was chosen as the 2017 Visionary Article in Intellectual Property Law and in addition won an award, by Michigan State University.

She was recently identified as "the foremost thinker on AI and copyright" in the American Copyright Society Annual Event by Judge Katherine Forrest. Her article "Equality and Privacy By Design" addresses big data, that AI systems must "swallow", as the major source of biases, including at workplaces, rather than the algorithm, and suggests a new model of AI data transparency (Fordham U.L.J., special edition on AI and big data). Her article "From the Myth of Babel to Google Translate" discusses, among other topics, AI biases and discriminative results.

Currently, she is writing two books, one of them discussing the interconnections between IP and AI. Some of her latest works discuss blockchain platform in regard to intellectual property regime, addressing questions of the advantages and disadvantages regarding the use of blockchain platforms for selling IP assets - is it "the Promised Land" or "the Dark Side of the Moon". Previously, her article "The Right to Privacy and the Balloon Theory” was judged by West (Thomson Reuters) Publisher as one of the best law review articles related to entertainment, publishing and/or the arts published within 2014 in the U.S. Her work on the book "Intellectual Property at Workplaces: Theoretical and Comparative Perspective" won the Van Calker Fund Award, awarded to selected scholars and was described as a profound academic work on the field. She won the Minerva Center for Human Rights award as well as the Silbert grant for other research she has done.