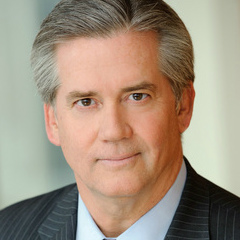 James A. Keyte is director of the Fordham Competition Law Institute and, as an adjunct professor, teaches Antitrust Law.

He is global director of development for The Brattle Group, an economic consulting firm, where he acts as a liaison between Brattle and law firms, as well as oversees project execution.

Previously, Mr. Keyte spent more than 20 years as a partner at Skadden, Arps, Slate, Meagher & Flom LLP, where he handled a wide variety of antitrust litigation, transactions, and advisory matters across numerous industries. He led high-profile antitrust cases involving alleged price-fixing, monopolization, mergers, intellectual property licensing, and sports-related matters, including class actions. He was also involved in a number of high-profile mergers, several of which involved litigation challenges by the DOJ and FTC.

Mr. Keyte is the past chair of the Trade, Sports and Professional Associations Committee. He is a frequent contributor of antitrust articles to the Antitrust Law Journal and Antitrust Magazine on a variety of topics, including merger analysis, market definition, and conduct-related issues. Mr. Keyte is a former senior editor of the Antitrust Law Journal and a current editor of Antitrust Magazine. In 2012, he won the Institute of Competition Law’s Antitrust Academic Article Readers Award for “‘Tally Ho!’: UPP and the 2010 Horizontal Merger Guidelines.” Mr. Keyte was repeatedly selected for inclusion in Chambers USA: America’s Leading Lawyers for Business, which has described him as a “brilliant” antitrust lawyer and a “bulldog in the courtroom.” In addition he is listed in The International Who’s Who of Competition Lawyers & Economists 2014, Who’s Who Legal: Competition 2015 and the 2016 Competition and Antitrust Expert Guide.