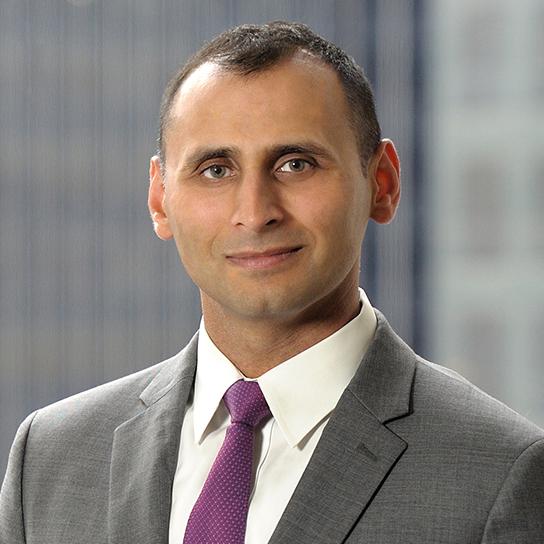 Muhammad U. Faridi is a Partner in Patterson Belknap Webb & Tyler LLP’s Litigation department.  His practice focuses on complex commercial litigation, including disputes related to structured finance transactions, breach of fiduciary duty, international joint ventures, and fraud. He has handled a wide variety of litigation matters at various stages—including jury and bench trials and appeals—for large financial institutions (such as financial guarantors and hedge funds), international manufacturing conglomerates, large pharmaceutical companies, and not-for-profit organizations.  He has also advised clients with interests in distressed businesses, and his clients have recouped billions of dollars through litigation and out-of-court settlements.
Mr. Faridi has been recognized by several professional associations and organizations.  He was named a “2018 Rising Star” by the New York Law Journal, which “recognizes the region’s most promising lawyers who are no older than 40.”  He was also named to Benchmark Litigation’s 2017 “Under 40 Hotlist” of practitioners who “have been deemed most promising emerging talent in their respective litigation communities in the US and Canadian litigation community by peers and clients.”

Mr. Faridi has also written extensively on commercial litigation in New York.  He is the co-editor of Commercial Division Practice Guide (Bloomberg), a treatise that seeks to provide guidance on the process of litigation in the Commercial Division of the New York State Supreme Court, a court established to enhance the quality of judicial adjudication and to improve efficiency in the case management of commercial disputes in New York.  Mr. Faridi is also a contributor to the American Bar Association Section of Business Law's annual review of business courts in the United States.  Further,